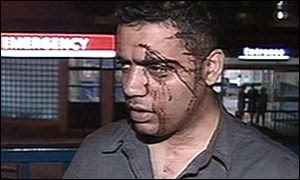 Shahid Malik MP: House Scam
After the Claire Short teaser, The Telegraph has broken the first of its main stories of the night, just in time for the ten o'clock news bulletins. It's Shahid Malik, a justice minister who has been troughing like there's no tomorrow (which is now true for him). Described as a 'rising star' in Labour's ranks by Sky news, it seems that star has just gone supernova.

Since being elected in 2005, Mr Malik has claimed the maximum amount allowable for a second home, amounting to £66,827 over three years. Last year, he claimed £23,083 from the taxpayer for his London town house, equivalent to £443 per week. The Telegraph can disclose that the “main home” for which Mr Malik pays out of his own pocket - a three-bedroom house in his constituency of Dewsbury, West Yorks - has been secured at a discounted rent of less than £100 per week from a local landlord who was fined for letting an “uninhabitable” house. Mr Malik also rents a constituency office from the same businessman, Tahir Zaman.

This looks like a serious scam cooked up by Malik and his 'businessman' mate whereby the former was charged by the latter very low rent on a property but then claimed the full allowance available under MPs second home arrangements - from public money. Whichever way you look at this, it's worse than merely dodgy - there could well be the small matter of a conspiracy to defraud the exchequer involved. The report continues:

Mr Malik’s arrangement means he pays below market rent for his main home while billing taxpayers thousands for his second home in London. His second home claims have included £2,600 for a home cinema system — which was cut in half by officials — and £65 for a court summons for not paying council tax.

I tell you what, though, this whole sordid mess is becoming utterly ridiculous. This government is finished (19% in the Euro polls - same as UKIP - and still falling), this parliament is a total disgrace and now Nick bloody Toenails is on the BBC trying to convince us that it's all somehow our fault for being bloody angry about it. Incredible.

==Update==
While Margaret "I'm A Horse" Beckett was being roasted alive on Question Time, Boris has now put the boot in. He said this evening on Sky: