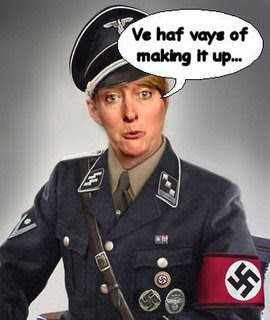 Does anyone in this government have any shame whatsoever? If James Purnell and Tony McNulty's unethical behaviour wasn't bad enough, today's revelations about Jacqui Smith are quite appalling.

Needless to say Today has ignored the story entirely.

You've been busted, you duplicitous, sneaky liar. Resign and face the criminal prosecution that damn well should await you.

She's got no brains, she's destroying British liberty, she's a liar who's still defrauding the taxpayer, she's married to a pervert - no wonder she's gone so far in the most perfidious, venal government ever to hold power.