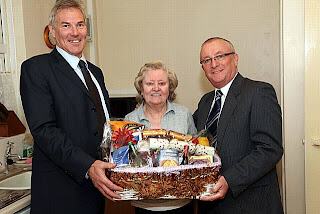 Bury MP David Chaytor is the latest Labour backbencher to have swindled the taxpayer over a phantom mortgage.

According to the Telegraph he admitted last night that he had claimed almost £13,000 in interest payments for a mortgage that he had already repaid. The report goes on:

Lawyers said that his claims, which were similar to those made by Elliot Morley, the former environment minister, could constitute a criminal offence under the 2006 Fraud Act and the 1968 Theft Act.

It's time for parliament to be dissolved, a general election to be called and the prosecutions to begin.

==Update==
Swiss Bob on that encyclopedic source of political gossip, The Daily Politics, did some superb research earlier today. He has demonstrated beyond any shadow of a doubt that the piggies have a criminal case to answer. The crime? Malfeasance. Here's that law in action:

Under English law malfeasance in public office is also a tort. In the House of Lords judgement on the BCCI Malfeasance Case it was held that this had three essential elements:

The Crown Prosecution Service guidelines on this offence say that the elements of the offence are when:

1. A public officer acting as such.
2. Wilfully neglects to perform his duty and/or wilfully misconducts himself.
3. To such a degree as to amount to an abuse of the public's trust in the office holder.
4. Without reasonable excuse or justification.