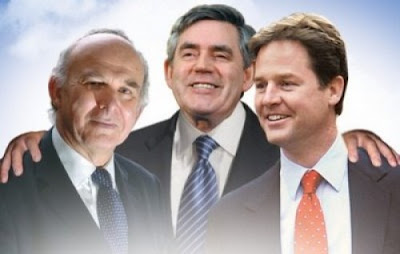 The Telegraph had it this afternoon and ConHome's Tim Montgomerie talked about it about an hour ago. Is it really possible? Can they be contemplating it? Are they mad - or stupid - enough to imagine this will wash with a body politic already being denied its right to make its voice heard over Europe, the economic crisis and reform of parliament? Do they want armed uprisings? Are they that corrupt and desperate for power? Will they betray everything they stand for - and their own constituents?

Yes, folks, these questions are aimed at Nick Clegg and his Liberal Democrats. They've just overtaken Labour for the first time in 22 years in an historic opinion poll. Clegg and Cameron have far more in common than Clegg has with Brown - which is significant insofar as Brown is more-or-less a toxic substance these days. Cameron is not. It would therefore be a seriously counter-intuitive move on Clegg's part to court a Labour party on its last legs, run by a man he dislikes and which has a track record of betrayal in such circumstances ('78/'97, eg.).

Well, if the practicalities and calculations are wrong, so is the morality. A pact like this would be the final insult to the electorate; it would be the final act of contempt for a public already suspicious that their 'leaders' are interested only in maintaining the status quo for as long as possible so they can line their own pockets for a few more months - or years if the pact causes effectively a 'rigged' general election where a vote for the LibDems becomes a vote for Labour: a stitch-up.

Not least because the stitch-up won't work, Clegg should take a principled stance, in full public view, and tell Brown to his face 'thanks but no thanks'. It would highlight the Labour leader's hideous cynicism in his desperate desire to cling on to power. By doing the right thing in taking a principled, longer view Clegg could nail Brown and his party so badly, the Liberal Democrats might not even need some unholy alliance with a bankrupt regime, or the PR fiddle, to be part of a government.

In the space of a single parliament, they could well be in a strong enough position to challenge Cameron and form one of their own. That's the real prize and it won't be won by alienating the electorate just when it needs to see some statesmen emerging from the Westminster rubble. If I were Nick Clegg, I would be regarding this as a no-brainer. But if he gets it wrong and goes with Brown, if I were David Cameron I would be tap-dancing with glee.
Posted by Jon Lishman at 5/30/2009 08:26:00 pm