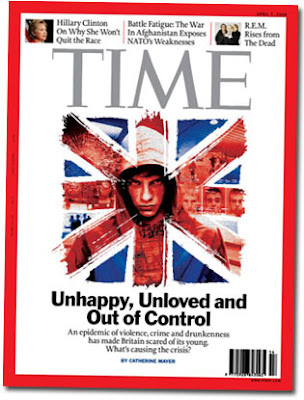 Parliament: Time's Up
Tip of the hat to That's News for the link to Time magazine's coverage of the expenses scandal. It makes for excruciatingly embarrassing reading. A journalist for Time's affiliate, CNN, a veteran of the UK political scene, put it thus:

I spent more than 30 years at Westminster as a political correspondent...now when I hear them call each other "honorable members" I am constantly reminded of Ralph Waldo Emerson's dictum: "The louder he talked of his honor, the faster we counted the spoons."

Neatly put. Britain and its parliament, thanks to our utterly hopeless little piggy MPs, has once again become an international laughing stock (you know, just like the last time Labour were in charge).

It's also further clear evidence, as if any more were needed, that this parliament - and Brown's God-awful government - is finished. Brain dead and paralysed, it is simply sucking up money and oxygen while we wait for it to dawn on someone that there's no chance of a recovery. It's time - and I mean right now - for cold common sense to kick in, a powerful demand for the life support machine to be switched-off to be shouted long and hard by everyone and a quick burial (in a pauper's grave) organised.

Then maybe the process of rebuilding the economy, the civil service, society, parliamentary authority and the reputation of this country in the wider world can finally begin. What is beyond doubt now is: the process cannot start until this parliament is gone.
Posted by Jon Lishman at 5/14/2009 12:45:00 am