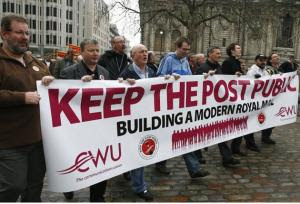 Labour rebels are about to block Mandelson's plans to part-privatise the Royal Mail, according to the Telegraph. Whatever the ins and outs of the debate, this indicates to me that the Labour Left is about to open a new front against Brown, making his position even worse (if that's possible).

It seems Iain Dale is quite correct in his prediction that things can only get much worse for this government generally, and for Brown personally.

[When] the government lost a parliamentary vote on an Opposition motion for the first time ever [it was] quite an achievement, really...
...this is only the beginning. As the Revolts website noted last week. Once you've rebelled once, it's easier to do it a second time.

Absolutely true, it seems. When the authority of a government - and the personal authority of a Prime Minister - is so utterly undermined, the unravelling process gathers pace at a extraordinary rate.

There is no cure for it. Brown might think he can limp on, paralysed and incapable of action but the reality is that for the sake of the country and his imploding party, the only possible course open to him now is (if he actually does want to fight one for once) to call an election. However, it's clear to me that this particular 'leader' is so lacking in honour, dignity and rationality, he will not do it. He will not take that decision.

Result? Well, you can take the view - and many apparently do - that he will hang on to the bitterest of bitter ends - to 2010. But I disagree. Events and his party for Brown are now out of control so I'm almost certain that the decision to go will be made for him, probably after the European and local elections in June. Brown's brief premiership will then become the sorry footnote in British political history it so richly deserves to be.

The new leader will be Jack Straw and he will (be forced to) call a general election which will probably be held in the early autumn.

And then we can make sure "New" Labour can take its place next to Brown in historical obscurity.