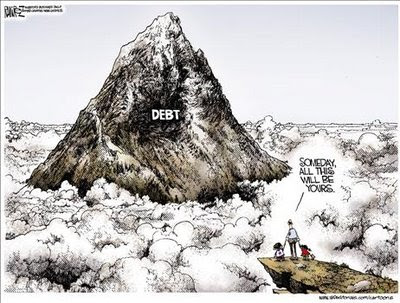 US financial newsblog, Intermex Power, has published a powerful article this evening by Brian S. Wesbury, chief economist, and Robert Stein senior economist at First Trust Advisors in Wheaton, Ill, who write a weekly column for Forbes. They have described the tax hikes combined with the huge levels of borrowing in the UK budget as a perilous error on the part of the government which will certainly not head off the potential credit downgrade.

...we need only look at the U.K., where the threat of a downgrade comes despite the large tax increases already built into their budget. It offers an example we shouldn't follow.

They warn the US government that to follow Brown's plans to borrow and print more money to finance ballooning levels of public debt would cripple the US economy by hammering the value of the dollar. The Standard and Poor's recent decision to 'review' the UK's AAA credit rating was not only intended to force the government to wake-up to the risks they're taking with unsustainable debt but to warn the US and the world that debt was a major danger. As the authors put it, the review of the UK's AAA status was...

...a shot heard 'round the world [and] happening despite [Gordon Brown's] planned tax hikes, because [the UK's] debt burden was to rise to 100% of gross domestic product.

So much for Brown's great lie, then: his la-la land 'global consensus'. The warning is clear: the government's policies are not only wrong, they are dangerously wrong. As Peter Hoskin of the Spectator noted earlier today

... Professor John Taylor's article for the FT today extrapolates from Standard and Poor's recent assessment of the UK's creditworthiness [and] delivers a warning about the rising national debt in America. This passage jumped out at me: that we are now in totally uncharted territory thanks to the government's mishandling of the economy year after year.

"While there is debate about whether a large deficit today provides economic stimulus, there is no economic theory or evidence that shows that deficits in five or 10 years will help to get us out of this recession. Such thinking is irresponsible. If you believe deficits are good in bad times, then the responsible policy is to try to balance the budget in good times. The CBO projects that the economy will be back to delivering on its potential growth by 2014. A responsible budget would lay out proposals for balancing the budget by then rather than aim for trillion-dollar deficits."

Taylor's point also applies over here. By the Treasury's own (optimistic?) forecasts, we'll still be running a budget deficit of 5.5 percent of GDP in 2014. Going off their current plans, that deficit would be similiar under the Tories. So unless the next government undertakes bolder fiscal consolidation than is currently being mooted, we may again be lamenting a failure to "fix the roof while the sun was shining.

The message for Brown and Darling, coming now from experts all over the world, can't be any more clear: you must cut spending or cause an even deeper crisis for the UK economy. Of course, they will not - but not for economic reasons, for political ones. Launching the essential raft of cuts in public spending would mean they would be unable to attack supposed 'Tory cuts' and thus in their uncomplicated minds lose their 'unique selling point'. As this appears to be the main (only?) plank of their political strategy it would also mean their having to work-out (very quickly) exactly what, if anything, this government is now for. I can provide the answer for them right now: this government is [good] for precisely nothing.

What voters simply must finally realise from all this is that the cynical - and severely flawed - political calculation behind the tax-borrow-and-spend 'policy', and behind triggering an insane debt explosion, is the only motive for Brown's reckless actions. It's the sheer desperation of a man (deservedly) threatened with the end of his political career and willing to devastate the UK economy in a last-ditched and deluded attempt somehow to 'save' himself. He's attempting to trick the electorate into backing him by generating a fake recovery for early 2010 which itself will result in the dreaded 'double dip' recession and then years of stagflation.

This country is currently at the mercy of a very dangerous man. The press better wake up to this fact and help people with a campaign to have him removed - immediately. It's the only option left.
Posted by Jon Lishman at 5/27/2009 09:40:00 pm