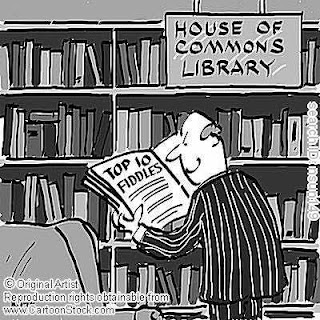 The Telegraph has launched a fresh attack on yet another Tory MP in the ongoing expenses saga. Right, well, let's just get the details out of the way: Bill Cash, best known for his strong anti-federalist stance on the EU, claimed 15 large for his daughter's flat in London "even though he owned another home near Westminster" in 2005. He named her flat as his second home, although on the 10 o'clock news tonight he explained that not only was this within the rules at the time, he wasn't actually living in the 'other home' in London at the time. He also agreed to repay the money.

OK. He's a trougher who's used taxpayer's hard-earned to take care of his offspring and as such is obviously the epitome of all that is evil in this world of ours. But I'm going to go slightly off message here and pose a couple of questions. First, why has the Telegraph's ongoing coverage of this story focused its biggest headlines on Tory MPs? Are we to believe that Labour, with Blears and Morley and Chaytor and Malik and so on and so on ad infinitum, are somehow immune to the most damning of front page splashes apparently fine for Tories who haven't actually, technically broken any rules? Why are Labour MPs, quite a few of whom have stretched the rules in some cases beyond breaking point in making huge capital gains over the past eight years by doing-up their 'second' homes at taxpayers expense, then flipping it and doing the same thing to what was their main home, and then flipping back and selling the - bear with me - first second home, (now a second home again), at a huge profit (take a breath) not being subjected to the same kind of forensic scrutiny and opprobrium as the Tories? The house-flipping is a scam and Geoff Hoon, to name but one, has made millions out of it. Why isn't he being hounded out of office like Kirkbride or, one assumes in due course, Bill Cash. The question is: does the Sleazygraph have an anti-Tory agenda? Well, who knows. The evidence kind of suggests it might, even if it's only a 'mild' one.

But it remains a bit of a mystery to me, especially when you compare their other revelation inside Friday's paper about Nigel Griffiths, the Labour MP and another member of Brown's untouchable inner circle (you remember, he's the married Edinburgh trougher who was snapped shagging some other woman in his office on Remembrance Sunday and then lied about it). This guy is a real scumbag and, you'd be forgiven for thinking, a walking front page - yet he only bags second or even third spot. Curious.

The second possibility is that Cameron, unlike Brown, is now quite comfortable seeing the old guard fall before the next election and thus isn't making much of a fuss about what might or might not be press bias. Bill Cash would be no great loss for Dave. Winterton wasn't, or Steed or Hogg or Fraser and so on and so forth. But I'm not so sure about this after the Kirkbride case, where the rabid left of the 'Respect' party played a strong part in unseating her. Cameron didn't lift a finger to support her, which could mean that actually he has no control over the course events are taking. In which case, he and the Tories are now at the mercy of the press - and, frankly, the far left.

There's another problem for Cameron, too. The reason Labour are stalling on deselection and the disciplining of its most corrupt Members of Parliament is because of the respective selection systems. Tory MPs are much more vulnerable to deselection than Labour not because they deserve it any more than Labour MPs - they clearly do not - but because the Labour system for deselection/selection is far more corrupt (as we saw with the Georgia Gould fiasco recently) than the Tory system. Labour really thinks they can get away with it - and here's a thought: maybe they can! So the only place left for us to go and where these thieves might, just might, be held accountable for their criminality is the General Election. I just pray people won't get fooled into actually rewarding them by stupidly punishing the Tories. There's an even bigger picture than the expenses scandal, and that's the disaster that is Labour-in-office. They have to be kicked-out at all costs, not least because they deserve to be.

So Bill Cash, old chap, you'd better watch your back mate. And do not expect your daughter to be standing again as a Conservative candidate any time soon. Your boss has opted for an attrition strategy - probably because he had no choice. The Tory casualties will be very heavy before the General Election as a consequence.