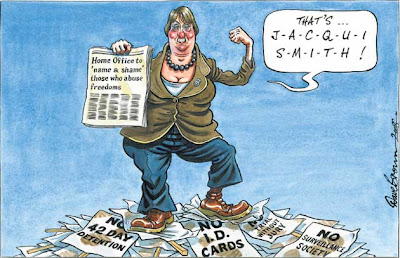 Believe me, there's a long list - and they all mount up!

Philip Johnson gives us a rundown of some of the things we all could do before new liebour came to power. And there I was thinking it was only me that felt better off, happier and far more free before these bastards fooled the country into voting them in, and then launched their all-out war on civil liberties. This list is certainly not comprehensive, I might add!

» Own a horse, donkey or Shetland pony without possessing a passport carrying a picture of the animal.

» Ride off with a pack of hounds in pursuit of a fox or stag.

» Play the piano in a pub without an entertainment licence.

» Stage more than 12 events a year at, for instance, a school or church hall at which alcohol may be served without a full licence.

» Set off a firework after midnight or be in possession of a firework if aged under 18 at any time other than the period around Bonfire Night and New Year's Eve.

» Own a pistol for any purpose, including sport target practice.

» Stage a protest of any sort, even if alone, within 1km of the Palace of Westminster, without the authority of the Metropolitan Police Commissioner.

» Fish in the River Esk without authorisation.

» Enter the hull of the Titanic without permission from the Secretary of State.

» Import into England potatoes which a person knows to be or has reasonable cause to suspect to be Polish potatoes.

» Obstruct the work of the Children's Commissioner for Wales.

» Imbibe an alcoholic drink on a London Underground train or bus.

» Keep a car on your own driveway without tax, even if it not being used, without filling in a form.

» Sell a grey squirrel (though you can kill one).

Before you say you support any or all of them (and one of them is BoJo's handiwork, I seem to recall), think about the principles: civil liberties are there to protect individuals and minority groups generally from the intrusion of the state. That's why statist Labour has always found them to be incompatible with their ridiculous ideologically authoritarian view of society and the 'role' of the state in it, especially now. Johnson's conclusion:

Labour has created new offences at twice the rate of the previous Tory administration, which was bad enough in this regard, and it has done so at an accelerating pace. Now you may support some or all of these new laws. What cannot be denied is that we have had a frenzy of law-making that has changed the character of the nation in a way that many of us neither expected nor wanted – even those who voted Labour (especially those who voted Labour, perhaps).

The first thing any new government must do is audit and then abolish any and all of Labour's legislation which is deemed either offensive to common sense or impinges on civil liberties, or both. This means that those terms - common sense and civil liberties - which were once taken for granted in what once was our far more free society, will need to be redefined after the constant and determined assault on them from the Left over the past twelve years.

The next election should be fought on this ticket just as much as an anti-corruption and economic one. The next government will represent nothing less than 'regime change' (from elective dictatorship back to democracy!). The role of Europe in this disturbing trend will need to be carefully examined, too, of course.

First, though, fight for the freedoms you've lost: kick this government out!

==Update 9.11pm==
I missed this excellent piece by Iain Dale on the subject of Labour's assault on liberty and the need for the opposition parties to stand on a civil liberties agenda. I highly recommend it.

==Update 2==
Hattip to Old Holborn for this chilling video.

Remember, the system isn't regulated and the police keep your DNA even if you're innocent (like all the people featured in the clip, for instance).
Posted by Jon Lishman at 5/22/2009 06:35:00 pm