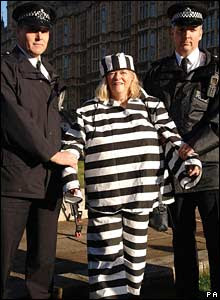 Iain Dale thinks that there is an Ann Widdecombe bandwagon developing. The woman Quentin Letts said had a "voice [that] could admonish Lucifer himself and leave him wishing he had opted for a life of sanctity", Doris Karloff to the Left, might be the next speaker of the House of Commons on June 22nd.

After you overcome the initial sense of severe shock the suggestion seems to inspire, you kind of think, well, she might be ideal. She's standing down at the end of this parliament, she hasn't been mired in expenses sleaze and she certainly won't take any crap from anyone.

Given the surreal turn of recent events, this would at least be consistent, if nothing else.

Let's remind ourselves of that performance on HIGNFY a few years ago - and just change the venue, the personnel and the costume:

==Update==
She's just been interviewed on the Beeb and she's called for everyone to 'reflect'. I'll go and polish myself, then. Anyway, asked about the job of 'interim' Speaker - she didn't rule it out but I think she's with her party on this: an immediate general election so that there will be no 'interim period' and therefore no Ann Widdecombe Speaker.

Cameron kept his powder dry over this issue and let Brown and Clegg act as assassins. My guess: he has a bigger target on his mind (forcing that election by getting rid of Brown). Interesting times!
Posted by Jon Lishman at 5/19/2009 03:00:00 pm