The Speccy is on fine form this evening, with a post by Fraser Nelson about the economy that should make normal people's bowels turn to water. As he says,

The law of unintended consequences is one that Westminster unfailingly passes, and there are signs that the massive Quantitative Easing programme is making it harder for companies to raise money, because the government is flooding the market with its own IOU notes. The Bank of England today confirmed that less than 1% of the £44.5bn it has printed has gone to buy company loans – it had indicated that as much as a third of the £150bn pool would go to companies. Instead, it is a mechanism to help the government issue the £240bn of gilts it’s issuing this year. Why is this important? Because if the markets think QE is actually a way of one department of the government printing money for the other departments to spend (a la Weimar Germany), then confidence in the currency col 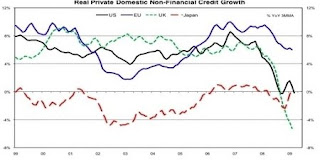 lapses. And right now, it looks very much like the Bank of England’s asset purchase

Scary Graph 2
programme is a device to buy state debt, masquerading as an attempt to target inflation.

If this is the case, then as the money supply spirals out of control and the currency is debauched, there is only one possible outcome: Britain's purchasing power parity will nosedive as debt levels multiply and inflation begins to soar. We will all become much, much poorer. Brown's mission to sabotage the economy for the next government by bankrupting Britain gathers pace.