"Bercow's Not A Tory!" -Cameron 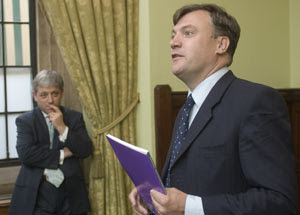 Puppet and master
Conservative Home has already given some inkling as to the scale of the animosity Labour has potentially generated by playing politics with the speaker's election. In cynically manoeuvering John Bercow into a winning position, the Labour goons have gleefully set Cameron and the shadow front bench on collision course with the man who now looks certain to be has now been elected to that office.

Revealing blog from Tom Harris MP:
"A Labour colleague was in the toilet next to the chamber just before the first ballot, when he was joined by David Cameron in the adjacent urinal.

“David, I’m about to vote Tory for the very first time in my life,” said my friend jovially.

Job done, then. Poisonous Brown Labour have screwed and skewed parliamentary process once more. These events must surely cast doubt upon the genuine freedom and secrecy of the voting process. And there we were thinking this sort of thing only happened in Zimbabwe and Iran.

A terrible result for British democracy, once again. Bercow has no support from the main opposition party and is a serial expenses abuser to boot. It will be in his interest to follow the Brown line of blaming 'the system', as though MPs are somehow victims of their own perfidy and greed, because 'the system' let them get away with it. And once more, we, the electorate, are told effectively to go f**k ourselves.