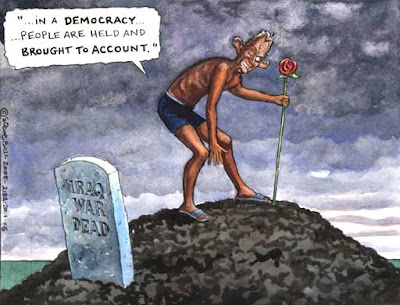 The Observer's just broken this pretty shocking story. What's the real reason for Brown opting for a secret Iraq whitewash inquiry? Is it that Brown has something to hide himself? Probably, but no, not quite that. Is it because there was pressure brought to bear by a US government keen not to reopen old wounds? Absolutely not.

The real reason for the secret inquiry is that Brown did a deal with - guess who - Anthony Charles Lynton Blair. According to the Observer:

Tony Blair urged Gordon Brown to hold the independent inquiry into the Iraq war in secret because he feared that he would be subjected to a "show trial" if it were opened to the public, the Observer can reveal.

The revelation that the former prime minister, who led the country to war in March 2003, had intervened will fuel the anger of MPs, peers, military leaders and former civil servants, who were appalled by Brown's decision last week to order the investigation to be conducted behind closed doors.

Blair, who resisted pressure for a full public inquiry while he was prime minister, appears to have taken a deliberate decision not to express his view in person to Brown because he feared it might leak out.

Instead, messages were relayed through others to Sir Gus O'Donnell, the cabinet secretary, who conveyed them to the prime minister in the days leading up to last week's inquiry announcement.

The other parties are already up in arms about this, and Nick Clegg's reaction was pretty blunt:

"If this is true about Blair demanding secrecy, it is simply outrageous that an inquiry into the biggest foreign policy disaster since Suez is being muzzled to suit the individual needs of the man who took us to war - Tony Blair."

Quite. It's another stitch-up from beginning to end. Just like the referendum on Europe, out-of-control public finances as Brown tries to buy himself a general election, the expenses scandal and a whole clutch of others. I suppose we should not expect anything more from the most corrupt and incompetent government in the history of Britain.

The Tories offer a faint glimmer of hope, though, as they have 'threatened' to widen the scope of the inquiry if Brown doesn't immediately perform an about-face. Good for them.

But Brown. Ah, Brown. Lying once again to House of Commons. Doing shady deals with his nemesis. Spinning his way into another media disaster. What a numpty.

"Security" was his excuse for holding a secret investigation, with no powers of subpoena and no witness oath, with a panel tainted by previous inquiries and a report delayed for a year. Well, people, now we know the real reason: one more small favour for his predecessor; one more giant insult to the people of the United Kingdom. Mind you, I doubt he did it willingly. Brown thought he had finally killed-off Blair once he'd knifed him in the back and stolen his crown. But it's never that easy with regicide. Ask Menzies Campbell.

As the only suitable role model for Brown I can think of would say:

The time has been,
That when the brains were out the man would die,
And there an end; but now they rise again,
With twenty mortal murders on their crowns,
And push us from our stools.

Blair's ghost has returned to haunt the usurper, mad McBrown. Seriously, though, just when you think this government cannot get any worse, something like this pops up. Incredible. Surreal.