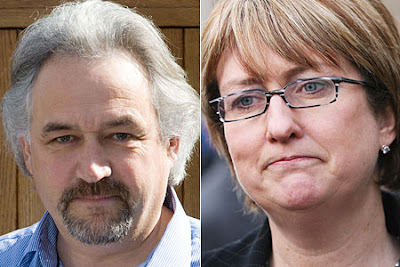 What are the implications of this surprise resignation ahead of the Euro and local elections on Thursday? Well, the Spectator called it yesterday, with James Forsyth prophesying:

Whenever word gets out that a reshuffle is underway, the rumour mill goes into overdrive—no speculation it too outrageous or too thinly sourced to make the rounds. So there’s a danger that Ministers could think, wrongly, that they’re going to be dropped or demoted and decide to get their retaliation in first.

I'm not sure this is quite an example of that - she was an epically useless Home Sec and wanted to quit anyway - but given that Number 10 appears to have totally lost control of not only the news agenda (Queen's snub over D-Day, for instance) but also their own economic policy on the car industry (LDV re-enters administration), it is true to say that it is the first sign of that 'chaos' to which Forsyth referred.

The fact, for instance, that they have another dead man walking in Alistair Darling coming out on Sky this afternoon to try to explain why Smith had gone speaks volumes about how limited Brown's scope for change in any reshuffle now is. Better than half his cabinet, including his Chancellor, are tainted by the expenses scandal, with Geoff Hoon the latest double claimer forced to pay back the cash he nicked. He is also one of the Labour ministers who benefited so richly from the 2004 rule change on flipping that Brown denied all knowledge of in a bizarre exchange during an interview with Adam Boulton yesterday.

As Fraser Nelson says this afternoon, what Smith's departure really does emphasise is Brown's helplessness. He goes on:

This gives her a bit of dignity, and will frustrate Gordon Brown who would have liked to announce this himself. The reshuffle is one of the few weapons left in his arsenal - with Labour's poll rating now below room temperature, he is about to lead the party into what will doubtless be its worst-ever defeat. And he'll look more helpless now; given he can't control his own reshuffles in a timely way.

As it all begins finally to unravel only one question really remains: can Brown hang-on as leader? Now that he has lost what was, apparently, his only 'unique selling point', (however mythical) - his control over his party - I still maintain he will be knifed in the back, shown the door, quietly asked to leave: whatever the method of his removal, he will be removed. Why? Because there are strong signs that it is finally dawning on the Labour donkeys that there is one, consistent, unifying feature of this vortex of national tribulation and political chaos they (we!) are having to suffer - and he lives in Number 10.