Gains For Far Right Across Europe 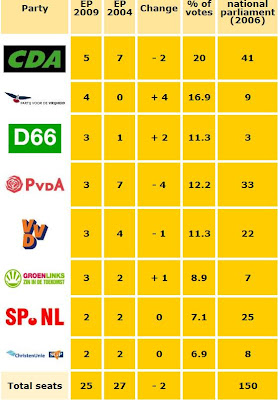 Dutch newsblog NRC Handelsbad, released their Euro results yesterday, well before the official release time which is, apparently, 10pm tonight. The right wing, anti-immigration party of Geert Wilders, PVV, (second from top), shocked the Netherlands by coming from nowhere to gain 4 seats and 16.9% of the popular vote. These results are reliable judging by the website and by what it says about them:

[Above] are the unofficial results from the European parliament elections in the Netherlands. Officially, member states are not supposed to release results until the last polling station closes on Sunday evening, but the Dutch government says transparency is equally important. The Netherlands narrowly escaped a lawsuit after releasing unofficial results during the 2004 EU elections.

Across Europe there have been reports of increases in the vote share of far right parties which suggests that there is a possibility the BNP could be heading for gains in Britain. Confirming the Dutch result, the Telegraph tonight says:

Austria's eurosceptic parties also did well, winning 17.8 per cent of the vote at the expense of the ruling coalition. In Slovakia, a turnout of just 19.4 per cent was expected to propel at least one ultra-nationalist into the European Parliament for the first time. Hungarian far-right parties were also predicted to make gains.

While I'm pretty comfortable with the socialist and centre-left parties in Europe getting the kind of kicking they richly deserve, especially the Labour party here, I'm absolutely not looking forward to BNP gargoyles benefiting from the vast dollops of European gravy potentially coming their way so they can redouble their poisonous efforts.

I tell you what, though, the message should be hammered home that if the BNP do win Euro seats tonight, it will be the fault of Labour, not least for successfully demonising the Tories for decades in the targetted areas. Well, that kind of hate politics has now come to bite Labour, and Britain, on the backside. I hope they are happy with their 'achievement'.

==Update==
Sky is reporting that Nick Griffin has won a seat in Manchester. Scenes there of socialist worker protests preventing the fatty blackshirt from entering the town hall.

==Update==
According to ConservativeHome, the Tories have top polled in Wales! If that's true, that's just incredible.

==Update==
According to Iain Dale's radio coverage (see link box in sidebar), the BNP is doing very badly in areas they'd expected to advance, such as East Riding in Yorkshire where they've been battered down into fifth place. Is the panic over, then? Let's hope so. More amazing Tory results coming in all the time - especially in Wales, where they've just come first in Cardiff South which is (was) a rock solid Labour seat (Alun Michael's, no less).

==Update 11.28pm==
According to the Beeb, the BNP have taken a seat from Labour in Yorkshire and Humber. Incredible - and could be the thing that finally buries Gordon Brown. They only have themselves to blame for opening this country up to fascism for the first time since the 1930s. Appalling news. Humiliating.
Posted by Jon Lishman at 6/07/2009 08:22:00 pm