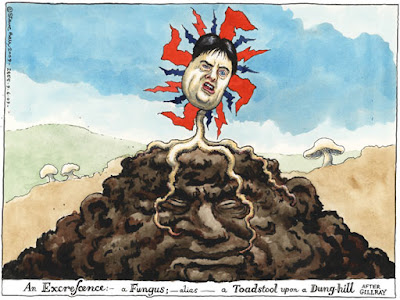 I know some of the major bloggers have written about this already today (Iain Dale, for example) but none has really nailed Brown for the real motives behind his sudden discovery of reformist tendencies. On the one hand is his dishonest desire to distract people's attention from the fact that the system is not broken - if anything it worked perfectly in weeding out those members of parliament who are not fit for public service. On the other is his desperate wish to deflect people's attention from one of the key and most vital aspects of 'the system' that he wants to 'reform' (attack): when members of a government fail to live up to public expectations they must face the will of that public via a general election. But Gordon doesn't want one because he's scared he will lose it. Pathetic.

But there is another question that has been oddly ignored by most commentators: when did the expenses scandal morph into a breakdown in our electoral system? By all means fix the system governing MPs' handouts, but what has that got to do with how we choose our MPs? Since when will the abolition of the FPP system of voting solve the problem of crooks conning their way into government? The answer is, of course, it won't. As I said above, it is nothing more than a smokescreen. Only, that's not entirely true. Unfortunately, there's more to it, as Janet Daley pointed out a few hours ago:

Nick Robinson at the BBC is reporting that Gordon Brown will propose to change the Westminster voting procedure to an alternative vote system. If this is true, it is the most shameless attempt to rig the electoral process in living memory. What the "alternative vote" would mean is that it would be virtually impossible for the Conservatives ever to regain power. Labour and LibDem supporters could simply institutionalise their game of tactical voting: by always placing each other's party as their second choice, they would guarantee Left-liberal coalition governments forever.

Mr Brown apparently intends to present this as part of his response to the MPs expenses scandal - but the scandal had nothing to do with the way MPs were voted into office. It was about the way they behaved once they had been elected. (If there is any genuine scandal about the electoral system, it is the over-representation of Scotland at Westminister but somehow I doubt that Mr Brown will choose to address that outrage.) Reconstructing the electoral system so that a Lib-Lab coalition could never be displaced would be more likely to produce even more complacent arrogance in the political class.

What we are clearly facing is a desperate, discredited prime minister who knows that he can never be re-elected under the existing rules and so, in his last five minutes in power, is planning to lock his opponents out of office. This proposal never appeared in any Labour manifesto. It has no mandate. It is a bizarre attempt to distract attention from what should be the real debate about Gordon Brown's record, and the failure of his high-tax, high-spend policies. What makes me think that it was the brainchild of Peter Mandelson?

These people are trying to rig the system from top to bottom. No general election, no referendum on Lisbon, no accountability for members of the government accused of fleecing the taxpayer, vast ministerial powers turned over to unelected Peers and now, as if that wasn't enough, a plan to destroy an electoral mechanism that is, frankly, the only thing left that still stands between us and an eternity of socialist excess and failure. Brown and his pisspoor posse have poisoned every British institution they've ever touched and lied about the chaos they've left in their wake at every turn. Now they seek to destroy the last chance for our political salvation, too. Our solitary remaining hope? David Cameron. Oh dear.