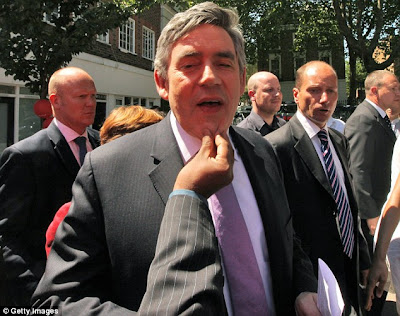 According to government sources, someone masquerading as a Labour supporter pinched Gordon Brown's chin yesterday in what the Prime Minister's private Security Service (the four bald goons in the background) are calling a "clear assassination attempt".

Asked to explain why the phantom pincher had been set-upon, beaten senseless and then shot dead, one of the hired SS Brownite praetoriani insisted, "Don't f**k with us or you're next."

The Prime Minister defended his SS men by saying that he was assured by them the 268 rounds of dum dums used to pacify the unconscious prankster known terrorist were necessary and justified in the circumstances.

"It was a proportional response to a credible threat and I would like to thank the SS for saving my life. My chin was a bit red for a while but I'm fine. These men are the front line against people who would see me dead before I've finished the job the great German people elected me to do. You will be proud of them."

When asked if there would be an enquiry into the incident, or an inquest, Der Fuhrer was adamant.

"Look, my SS have a difficult job to do, a dangerous job. Sometimes it can seem to the public like it's a vicious, murderous, savage, even bestial job. But they're highly trained professionals and they've explained the matter to me and I accept that explanation. I understand you in the media have a job to do but you will accept this explanation.

"You know, building the thousand-year boom and saving the world from the three great evils of democracy, liberty and prosperity has always been my goal. It's why I went into politics. My Presbyterian father between beatings used to say to me "kill all your enemies before they have a chance to become strong and always, always, place personal political ambition ahead of all other considerations." I often wonder how he would react to the corruption in our society and our Parliament - to the Zionist/Tory/Blairite conspiracy that has brought this country to its knees.

"I can tell you now, he would say I should smite my enemies. If a purging is needed, he would say to me, ignore the bloodbath and get on with it. No mercy for any opposition is the Presbyterian, progressive future. My father taught me that lesson and believe me, I learnt it the hard way. So in these difficult times I'm taking the tough decisions every day: the life and death decisions. The decisions that affect you all.