So the first Bercow 'big reform' is to cast off the Speaker's wig. This is a laughable, disingenuous gesture designed somehow to provide a visual representation of that 'clean break' the Berk referred to in his cringe-making speech yesterday. But if you take the wig off the man, all you are left with is the man - and this man is part of the problem. Dan Hannan:

...the hairpiece isn't simply a mediaeval relic. It's a reminder to its wearer it that his office is bigger than he is. It was a bad start when Michael Martin arrogantly refused the headgear. "It's just not me," he insisted, presuming to take the job on his own terms - an attitude which prefigured his eventual disgrace. Had the old boy slapped on the horsehair, it might have inspired him to try to live up to the role, to be a bigger man.

Tee hee. But through this first, empty act, Bercow's immediately fallen into line and begun to do precisely the kind of thing that Brown-Labour wants: distracting, fake iconoclasm motivated not by any genuine principle or sincere wish to modernise - or 'reform' - constructively a parliament that has been rendered rotten only by its current members' systematic abuse of its time-honoured traditions, but by a simple, dishonest desire to stay put. And they will do anything and say anything they can to that one end. As Peter Oborne said in a TV interview today, Bercow is the manifestation of the corruption that has crippled parliament. He was forced to pay six grand of evaded capital gains tax and over a thousand pounds' worth of dodgy claims for a personal accountant.

How can this man, along with all the other MPs now tainted by serious and proven sleaze, be trusted to reform the system? The answer is he most certainly cannot. The problem is, that question is part of the distraction. The fundamental point is this: forget trust - we're well beyond that - MPs, including Bercow, no longer have the moral authority to change or create law. For Labour to think that it can install its placeman in the Speaker's chair and carry on regardless is a (further) deep insult to the electorate. It is a travesty and the so-called reforms that will be generated consequently will be no more than meaningless windowdressing and a waste of precious parliamentary time. 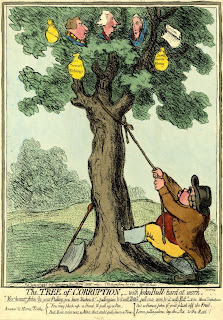 It has already begun. Harriet Harperson's first announcement on reform is to table legislation making it a criminal offence (a criminal expense?) for MPs to fiddle their fees or fail to declare their interests punishable by 'up to a year' in stir. Have you stopped laughing yet? Aside from the fact there's no mention of existing legislation that covers the small matter of tax evasion - or of false accounting - here we have in your proverbial nutshell the contradiction that will confront this bankrupt government and the parliament it helped to corrupt: legislation like this would not be necessary if honourable members were just that, honourable. That they deem this legislation necessary merely proves to the public that they consider themselves untrustworthy. "Well, if they can't trust themselves with public money, why the hell should we," the public will rightly think. (I do.)

They will go around in circles, new Speaker in the chair he does not merit. They will make laws to constrain a future generation of politician who might well need no such constraint, given the inevitably far higher level of public expectation and scrutiny that new generation will accept it will have to endure. What's clear is that this government and this parliament were incapable of obeying the letter and the spirit of the rules they themselves partly created. They were also incapable of exercising judgment in the realm of propriety, both individually and collectively. There is therefore no reason for them to expect people to swallow the notion that they themselves, in some sort of "reflexive lawmaking", should be permitted to make a new law that forces them to obey the rules. We say: no thanks, you no longer have the right. Besides, it will miss its target because such a law is always contingent upon what those rules actually are and those rules are made by, you guessed it, MPs. You see? Going around in circles.

The old system might be flawed, but flawed or not its basic operating premise, that MPs are honest and honourable, is essential if we are to have real democracy. It requires a degree of faith on all our parts to be successful. An honour code is the only way our elected representatives can exercise the power we give them to supervise the sovereignty of parliament, thereby ensuring the continued health of the body politic. And therein we find the root-cause of the problem: one dishonourable MP can cause enormous damage to parliament and to that health. Six hundred dishonourable MPs, including the Prime Minister, and you have a severe crisis. And the longer they stay in parliament, the graver the damage they do, by the very fact of their continued presence. But it should be unsurprising to us that these people are reluctant to leave, regardless of this damage. They are who they are, after all: they don't care.

Bercow, with his fake iconoclasm, is merely another sign of that 'graver damage' to which I refer. This man is an insult to our intelligence, with or without a wig. He's the latest symptom of a decayed, diseased legislature. The chief carriers of the disease are Gord'elpus Brown and his gang of amoral Labourists. (Tory sleaze has become a mere secondary infection, incredibly.)