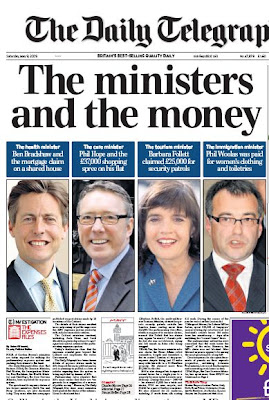 The Parliament website has published another list, according to The Times, this time of MPs who've felt the need to unburden themselves of our money. You can see it here. It's a surprisingly long list, given that we're talking about MPs.

There are some interesting entries (which we know about) from the titchy: Cheryl Gillan, Shadow Minister for Dogfood's return of £4.47 (presumably in Pedigree Chum coupons) right up to the really huge: King Labour Pig, Minister for [the] Health [of his bank balance], Phil Hope's monster hit of 42674.13 pound's worth of freshly laundered bills.

The total amount of troughed taxpayer cash regurgitated by the little piggies is £478,616.90.

Given that the amount pocketed, assuming a minimum of £80,000-worth of expenses per MP over 4 years, is around £52 million - but is surely much higher if take into account profits from the sale of flipped dwellings - this is simply not good enough as far as I'm concerned.

Individual MPs must ALL explain themselves to their constituents and be forced to stand for their seats in a by election.

There is, of course, a tried and tested mechanism for this already. It's called a GENERAL ELECTION.