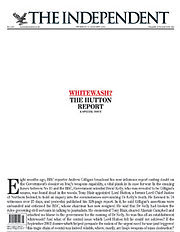 As far as I can tell from Brown's gabbled statement to the House of Commons right now, the latest Labour-inspired pseudo-inquiry into the Iraq war will cover the entire occupation, so its terms are so wide it will have no real focus. It will be secret so no one will know who testifies or what they actually say. It will take over a year for it report (the Franks inquiry only took six months). There will be no political representation, so, as Brown puts it, it will not be permitted to 'apportion blame'. So Tony Blair will once more will not be held to account for lying to the House. And so it goes on. As Cameron put it a few moments ago, it's just another Establishment stitch-up.

Sorry, none of this is good enough.

This is a just another bit of expensive, lousy, fake 'lesson learning' (whitewashing) by Labour's lying leadership and, as such, is yet another insult to the Armed Forces. Members of the inquiry board will be hand-picked by Brown and, as Clegg has just said, it will not be held in secret to protect British security, it will be held in secret to protect Blair's, and therefore Brown's, reputation. Clegg's right: only a public inquiry can heal the wounds to our democracy and to the reputation of our Armed Forces inflicted by Blair's terrible, vain, arrogant decision to take us into a war of aggression on the basis of untruths and without the slightest provocation from the 'enemy'.