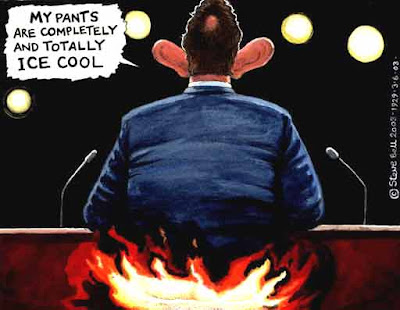 The Grauniad's chief 'security' correspondant, Richard Norton-Taylor has written a thoughtful piece on the subject of Brown's latest attempt to pour oil on the turbulent water that is the Labour Party just now. After the announcement of a 'review' of the planned Post Office privatisation (designed to appease the Left) and Sunday's preparation for a U-turn on ID cards (designed to appease just about everyone in the country) we now have another half-baked policy shift, this time on Iraq. With the latter, though, it appears Brown has completely, rather than only partically, miscalculated public anger. Iraq is not Mandy's Mail or the no-brainer that is "NO2ID". Iraq was a terrible business, shady and perverse, organised by people who would go to any lengths to create the conflict and motivated by a combination of personal vengeance (on the part of Bush and his political allies) and utter, brainless, deadly vanity (on the part of Blair and his).

Norton-Taylor voices the scepticism any sane person will feel about Brown's latest volte-face this time on the subject of a new inquiry into Britain's worst war.

There really is no legitimate reason now for any of the inquiry into the invasion of Iraq to be held in private. Extremely sensitive information, intelligence material in particular, has already been disclosed, either here or in the US, by official inquiries or leaks.

The reason why the government wants it to be held behind closed doors – a weapon allowing Whitehall to control proceedings – is to enable it to protect itself, and individuals, from embarrassment. To drive home the point, the members of the inquiry, led by Sir John Chilcot, the epitome of a Whitehall mandarin, will be made privy counsellors, told to swear an ancient oath of secrecy.

We already know a great deal about how the Iraqi banned weapons dossier was manipulated by Whitehall officials and intelligence chiefs, at the behest of their political masters – most notably, Tony Blair. We know from a leaked Dowing Street memo, marked " secret and strictly personal – UK eyes only", that, at a meeting Blair chaired on 23 July 2002, nearly a year before the invasion, Sir Richard Dearlove, then head of MI6, warned that in Washington "the intelligence and facts were being fixed around the policy"; and Jack Straw, then foreign secretary, said "it seemed clear that Bush had made up his mind to take military action ... But the case was thin."

Lord Butler told the Guardian that his committee set up to investigate the use and abuse of intelligence in the build-up to the invasion had seen the document. He said his report did not refer to its contents on the grounds that they related to US use of intelligence, which was outside his terms of reference. The explanation is one reason why a fresh inquiry needs to be held in public. That Chilcot himself sat on the Butler committee hardly inspires confidence that this new inquiry will be any more penetrating.

Other leaked documents, which we can assume were also seen by Butler, include a letter in March 2002 from David Manning, then Blair's foreign policy adviser. He told Blair that he said to Condoleezza Rice: "You would not budge in your support for regime change [an objective Blair was advised was unlawful] but you had to manage a press, a parliament, and a public opinion which is very different than anything in the States". A few days later, Sir Christopher Meyer, our ambassador in Washington at the time, told Manning of the need to "wrongfoot Saddam on the [UN] inspectors".

The 23 July 2002 document also revealed that ministers were warned by their officials and the then attorney general, Lord Goldsmith, that an invasion to topple Saddam would be unlawful. Goldsmith eventually advised that invasion was lawful by reinterpreting an entirely different set of circumstances – namely, the scope of past UN security council resolutions.

We have a good idea through leaked documents that Blair made it pretty clear to Bush two years before the invasion that he would commit UK troops. We know, because senior MoD officials have admitted it, that equipment for British troops was ordered late because ministers did not want to suggest to MPs or the public they had decided to go to war months before the March 2003 invasion.

We know from leaked documents that some ministers warned Blair of the need to prepare for the consequences of an invasion. The warnings were ignored because Whitehall, and the Foreign Office in particular, did not have the stomach to take on the US. To prepare adequately for occupation of a foreign country is a duty imposed by the Geneva Conventions. Senior military officials have suggested Blair, and others, could be prosecuted for war crimes on this ground alone.

These are very serious issues to which answers have not been given by those, ministers and officials alike, directly involved. Senior diplomats and security and intelligence officers were deeply opposed to the invasion. This should been their opportunity to speak publicly for the first time. Alas, it will not be.

Brown's and Labour's motives for all these ridiculous policy shifts are eminently evident. There isn't a principle in sight. These are all sops to a variety of troublesome constituencies, such as the Left of their party. But this latest whitewash inquiry is the most cynical of the three. As Norton-Taylor says, all the civil servant yes-men will be made privy councillors (effectively members of the judiciary) and will have to swear an "ancient oath". But he omits to mention who the President of Privy Council now is, as of June 5th 2009. Yup, folks, it's the Prince of Darkness himself, Baron Mandelson of Foy in the county of Herefordshire and Hartlepool in the county of Durham. He is now in charge of an inquiry into a war for which he almost certainly helped to lay the political groundwork and then build a huge patio of lies and spin on top of it.

You can just imagine the scenes in Downing Street last week: "It's alright, Gordon. Don't worry about Iraq. Just make me head of the judiciary and I'll handle it. We'll make it secret and tell them it's a national security matter. It won't report until after the election anyway so we're in the clear." That's how powerful the unelected have become now that Brown (unelected-in-chief) has finally bust not only our economy, but our democracy too.

"Hutton II" will be an even bigger stitch-up than Hutton I and Butler put together. Yet another terrible, terrible day for Britain. I'm sorry to say that I have no confidence David Cameron will nail Brown for this latest travesty. So, the abuse goes on.
Posted by Jon Lishman at 6/15/2009 06:48:00 pm