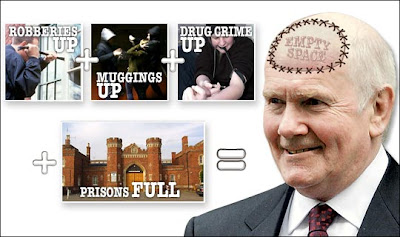 Guess who's coming back to the Home Office. Talk about recycling the trash.

Rumours are circulating that reformed Communist, reformed alcoholic, Blairite Jock, John Reid is about to join his arch enemy Gordon Brown's zombie government in what is (was?) being planned as some sort of spectacular move to shore up the cabinet a la Mandy. But Downing Street immediately sought to scotch the speculation after a meeting between Brown and Reid was leaked to BBC political toad, Nick Robinson, so the Spectator says.

Either the leak - the umpteenth act of sabotage from within Downing St. this week - has scuppered the plan completely or Brown will simply go ahead and bring this 'heavyweight' antagonist back regardless. The reality seems to be now that whichever direction Brown tries to step, he somehow finds a landmine.

There must be someone within his 'inner circle' - actually inside the bunker - constantly briefing against him and releasing confidential or embarrassing information to the press corps. It has paralysed Brown: he can no longer make any future plans because no sooner has he decided something than the media somehow get hold of it and splash it all over the internet.

All I really wonder, gleeful as I am that this puffed-up demagogue has once and for all been found out and laid low, is if he likes the taste of his own poison. Whoever's introduced it into Brown's water supply deserves a knighthood: the toxin is taking effect.

So don't worry, Gordo. The whole, horrible nightmare will be over soon, chum. Then we can all wake-up.

==Update==
According to Iain Dale, Reid actually told Brown he should quit in that meeting. Apparently, the conversation went something like this:

Extraordinary. I think (I hope) this isn't a spoof by Mr Dale. He is a bigwig insider, after all. Although the story is unsourced, which is unusual for Dale, spoofs aren't really his style.

If it is kosher, then fair play to the old Scottish Labour fart, Reid. And I wonder: could we be seeing the emergence of the stalking horse. He fits the bill... .