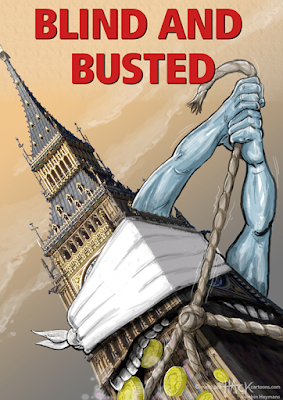 Tomorrow's expenses expose in the DT is probably the most gobsmackingly enraging of them all. More than 50 MPs have been over-claiming for Council Tax and pocketing the extra cash, most of them, surprise surprise, Labour. Not content with having all their utilities, mortgage interest and local taxes on their second homes paid for by us (why?), these troughers have gone a step further and actually submitted false tax claims.

Let's just remind ourselves of what the Department of Work and Pensions (you know, the department in which Kitty Ussher recently held a ministerial post, just before she entered the Treasury) says about people who try to cheat the benefits system:

Deliberately withholding information that affects your claim is stealing. That’s why we are targeting benefit thieves!

The Department for Work and Pensions (DWP) takes benefit theft very seriously. Although the vast majority of people who claim benefits are honest, those who steal benefits are picking the pockets of law-abiding taxpayers. In 2007-08 benefit thieves stole an estimated £800 million from public funds, that's why we are determined to catch them.

reats should not be taken lightly. There is no doubt that the government is serious about imprisoning benefit fraudsters - and that is what makes their hypocrisy so abject, and their fiddles so serious. That these thefts from the public purse are perpetrated by lawmakers is one thing, that so many appear to have been happy to misappropriate tax funds is quite another. Let's take a look at what the government says about tax fraud:

Tax fraud is when someone pays too little tax, or wrongly claims a tax repayment by acting dishonestly.The government can prosecute people who commit tax fraud, as well as anyone who helps them to commit the fraud.

As far as I am concerned, the redaction of the original document where these claims are revealed by MPs, who did not know that an uncensored copy would reach the press, shows intent. At the very least it demonstrates that many MPs felt they had something to hide and then tried to hide it. This fact a

lone merits extensive investigation. Simply repaying money because you've been found out is insufficient - and the police know that, so why are they not acting on information received?

All in all, though, this rotten parliament, as if this needs repeating once again, is morally bankrupt, has lost all authority to make law, is poisoned, paralysed and must be dissolved. Shout it out loud, folks. Every day from now until the dissolution. Many of these people are simply crooks and only a general election can rid us of them once and for all.
Posted by Jon Lishman at 6/19/2009 10:17:00 pm