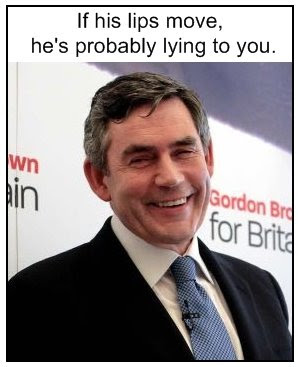 The Telegraph reports that the latest OECD study of the UK economy makes terrible reading for Brown and the Treasury and puts Brown's lies about Labour cuts into clear context. His stated plans to try to fool persuade the nation into voting for him at the next election by launching a slash and burn spending programme, funded with even more gargantuan chunks of borrowing, are also thrown into disarray the day after they were announced in Parliament (or, rather, two days after they were pre-announced on TV). The impact of his self-serving and utterly dishonest course for getting himself elected - for the first time, lest we forget - will cause hardship and pain for years to come, according to the report.

In its annual survey of the British economy, the Paris-based institution told the Government to slash the size of its deficit far more than it currently intends or face major problems in the coming years.

The OECD said that Britain's deficit would climb to 90pc of economic output – significantly higher than the 80pc level the Treasury projected in the Budget. In order to keep the UK economy in good health, it added, the Government should target "more ambitious" budget cut-backs once the recession is over.

These are conservative estimates. There are indications that if conveniently ignored public sector pension liabilities and off balance sheet, PFI costs are factored-in, that hideous number would be driven far higher. But it's not all bad news in the report. Some is even worse:

The institution...cut its growth forecast, saying Britain will shrink by 4.3pc this year, adding that the deficit next year – at 14pc of GDP – would be worse than in any other major country.

Meanwhile, the government can't even decide whether it is going to review its own spending plans or not, at least according to Edmund Conway's article, which seems to be slightly at odds with virtually every other report on the subject over the past few days.

The statement is significant, since it is becoming increasingly clear that the next election will be fought over public spending, with the Labour party already attacking the Conservatives for what it claims are excessive cuts in Government spending.

It came amid speculation that the Government has postponed the expected Spending Review this year, with Shadow Chancellor George Osborne speculating that this was intended to avoid spelling out inevitable post-election cuts.

So there it is. Britain will be broke for years to come and all you get from this dissected, stinking corpse of a government are increasingly desperate attempts to save its own rotting skin. Just what's needed in a crisis. Really inspiring stuff.

But this evil man, Brown. My word, what a lying, cheating, bullying, spiteful, poisonous, destructive, vainglorious waste of humanity this creature has become. Are you one of those people willing to be fooled by Brown's lies? Do you really want the con-artist who drove Britain to ruin in Downing St.?

If the answer is 'yes' then you are either insane or a brain-dead Labour tribalist. If the former, you have my sympathy; if the latter, then you belong to an ever-shrinking minority of idiots, thank God.
Posted by Jon Lishman at 6/29/2009 11:28:00 pm