What Is 'A Tough Choice'? 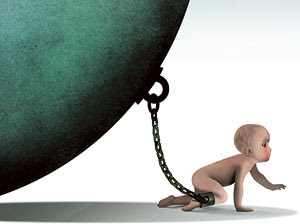 It is finally beginning to dawn on people that national bankruptcy is now a real possibility, thanks to the gargantuan levels of public debt generated by the so-called short-term 'stimulus' packages and vast budget deficits designed to mask the effects of the recession. It seems our own government, incapable as it is of running an economy in a period of apparent, relative plenty let alone during a downturn, now that it has decided to cling on to power till the bitter end needs some urgent lessons in what constitutes a 'tough choice'. Janet Daley points out in her typically clear-headed article this evening that people are clammering for some fiscal and monetary conservatism. I fear her call will fall on the prejudiced and therefore deaf ears of a left wing government.

So which kind of "tough choices" do you fancy? The ones that involve spending – as in, which bits of government expenditure would you choose to cut – or the ones that mean tax rises? You may as well start thinking about this because those will be the options available to you at the next general election.

The outlines of the parties' campaigns have now become clear. Labour, whoever is leading it, will be fighting the last war: trying to revive the demonic vision of "Tory cuts", as if they were somehow more fearsome than the Labour cuts that are already in the pipeline simply by virtue of being Conservative and hence inherently evil. But what even Labour spokesmen will be forced to admit, as indeed some of them did last week, is that – in the absence of serious spending reductions – the only way to fill the cavernous hole in the public finances will be through substantial tax rises. So while both parties will talk of having to make "tough decisions" – which is to say, of you having to endure some unpleasantness – they will mean rather different things by it.

She carries on by pointing-out (rather better) what yours-truly said a few days ago: Labour are being utterly dishonest in suggesting they are not going to have to cut spending - indeed have planned to do so already, but wish to fudge the issue by cutting spending stealthily. Brown's nail-chewed gnarly fingers are all over this approach. It's certainly not his second choice (and second rate) Chancellor's desire to hide from the public the scale of the problem the nation faces, as his consistent drift away from 'the message' has amply demonstrated, something that very, very nearly cost him job. But Brown and his stealth cuts are what we will have to endure. The problem is, they will not go far enough and will not be managed properly.

Daley then turns to the issue of tax rises, which is what this is fundamentally all about. Spending cuts, whichever way they arrive, as far as I'm concerned are a fait accompli. Even with the outlandish 'trampoline recovery' suggested by Darling, cuts are inevitable. As the budget deficit spirals to 110% of GDP

and total debt liabilities rocket to upwards of $10 trillion-plus (380%+ of GDP) there is no alternative: you just can't sustain that level of borrowing because the likelihood of the plug being pulled by the bond market and the whole rickety framework coming crashing down increases with every new sale. It's got to be paid down at some point no matter what happens. Without aggressive spending cuts, tax rises are inevitable but their impact on an economy in recession will be to kill a fragile recovery in 2010/11. Another downturn - the dreaded double-dip recession - will become a forgone conclusion. Unemployment will begin to shoot-up even further and tax revenues will decrease even more in spite of the higher rates. It would be a disastrous course to pursue, and yet Labour in their folly seem set to do just that. Hopeless.

It's perhaps better to look at a less partisan publication, then, for a bit of guidance on this subject. There's no better or worse place to look than The Economist. In this article of June 11th, the alternatives not just for Britain, but for the US too, are made crystal clear. It's worth a read, but here's the key part:

Broadly, governments should pledge to clean up their public finances by cutting future spending rather than raising taxes. Most European countries have scant room for higher taxes. In several, the government already hoovers up well over 40% of GDP. Tax reform will be necessary—particularly in places, such as Britain and Ireland, which relied far too much on revenues from frothy financial markets and housing bubbles. Even in the United States, where tax revenues add up to less than 30% of GDP, simply raising tax rates is not the best answer. There too, spending control should take priority, though there is certainly room for efficiency-enhancing tax reforms, such as eliminating the preferential tax treatment of housing and the deductibility of employer-provided health insurance.

The next step is to boost the credibility of these principles with rules and institutions to reinforce future politicians’ resolve. Britain’s Conservative Party cleverly wants to create an independent “Office for Budgetary Responsibility” to give an impartial assessment of the government’s plans. Germany is poised to pass a constitutional amendment limiting its structural budget deficit to 0.35% of GDP from 2016. Barack Obama’s team wants to resurrect deficit-control rules (see article). Such corsets need to be carefully designed—and Germany’s may prove too rigid. But experience from Chile to Switzerland suggests that the right budgetary girdles can restrain profligacy.

Yet nothing sends a stronger signal than taking difficult decisions today. One priority is to raise the retirement age, which would boost tax revenues (as people work longer) and cut future pension costs. Many rich countries are already doing this, but they need to go further and faster. Another huge target is health care. America has the most wasteful system on the planet. Its fiscal future would be transformed if Congress passed reforms that emphasised control of costs as much as the expansion of coverage that Barack Obama rightly wants.

All this is a tall order. Politicians have failed to control the costs of ageing populations for years. Paradoxically, the financial bust, by adding so much debt, may boost the chances of a breakthrough. If not, another financial catastrophe looms.

Can anyone imagine Gordon Brown, the man who destroyed pensions in this country in the first place, with his phantom 'moral compass' and his precarious standing within his own party, being the right man to take such radical action as raising the retirement age in Britain to, say, 70? There is no way, either, that he can be the right man because he is incapable of opting for what is, to socialists at least, the counterintuitive move of boosting output by actually lowering tax rates, thereby increasing tax revenues. Neither is he the man to cut spending aggressively across the board for a couple of years in order to lend the country some sort of financial credibility again, after he encouraged with pathological self-righteousness a credit-driven boom to overheat beyond the limits of sanity and for the economy to fly apart as a consequence. It seems there is no way he can be the 'right man' in any sense whatsoever for any job associated with the UK economy.

You can't employ a wolf as a shepherd. We need a change of government - and how!

Incidentally, if you think Britain's debt levels are catastrophic, spare a thought for the poor old Yanks (who've just hired a wolf of their own). According to this article, the true figure for US debt liabilities is now so large once 'off balance sheet' numbers such as pensions and healthcare are taken into account, it has long since overtaken the capacity of metaphorical hyperbole to illustrate its scale. US debt levels have now transcended the space-time continuum and blasted off into hyperspace. The figure is so large now, it's forming its own gravity well and everyone and everything is being sucked into it.

According to Richard W. Fisher, the president and CEO of the Federal Reserve Bank of Dallas, the unfunded liabilities of the US Social Security and Medicare system stand at $99.2 trillion today. That figure is not a misprint. If the US government plans to keep operating the Social Security system and the Medicare system, then the official federal debt really is $11.3 trillion plus $99.2 trillion, or $110.5 trillion. Why does our government state that its federal deficit is only slightly north of $11 trillion (with the term “only” a relative term, given that the true US deficit is about ten times greater than the “official” government figure)? Over the years, the US government has stated several reasons why they don’t include unfunded obligations in their official debt figures, with one of the most common reasons being that these programs are optional and can be cut at any time.

However, this practice is tantamount to a corporation omitting the cost of its health benefits program from its operational expenses even though it has promised its employees health care benefits. If the government is omitting the expense of the nationwide Social Security and Medicare programs from its budget, is this an admission that these programs will soon be history? Given the fact that a $110.5 trillion deficit puts every American family of four on the hook for more than $1.45 million, it seems unlikely that those of us that have paid a lifetime of Social Security taxes but are still many years away from eligibility will actually live to see the benefits of doing so.

This article's conclusions ring true for a UK facing problems just as grave - if not moreso because our economy simply does not have the capacity, flexibility or the potential for rapid growth that a superpower like America still most certainly does.

The government may attempt to implement the tax solution but it is probably more likely that when push comes to shove in the political arena, they will have to axe either the Social Security and Medicare programs, or maybe even both. If you think this outcome is unfathomable, consider that for these two programs and their associate benefits to survive, $99.2 trillion either has to be raised through taxation or cut from programs that have already promised funds. There is no other solution to this problem, other than to attempt to inflate the $110 trillion deficit away. Furthermore, when debating the realm of discretionary spending cuts to refill the government’s coffers, this avenue, in reality, is not viable either, simply because cuts from any other programs other than from those of national defense and national security won’t be large enough to make an impact. In the end, it seems as though most of us still believe that a bankrupt government can provide the backbone for an economic recovery.

"Axe social security and health care. Are they mad?" you hear the Labourists cry. No, not mad, my delusional lefty compatriots. Just broke.

As a friend wrote me the other day, summing-up the lunacy of our respective governments pretty neatly:

It's worth remembering, folks, historically things have turned out very badly over a lot less than a massive international debt crisis. Someone somewhere needs to get a grip. David Cameron must be the first.
Posted by Jon Lishman at 6/13/2009 05:54:00 pm