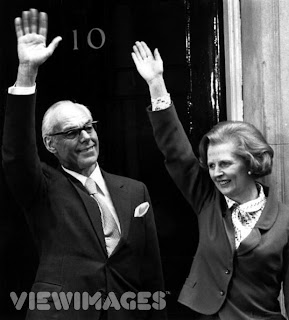 Just flicked on the iplayer rerun of the '79 election. Yours truly was too young (and still fairly American) to be remotely interested in anything political in those days. However, times change and it's fascinating to watch it now. In reviewing it I've realised one thing: the comparison between today and the end of the Major government is almost certainly a red herring.

One of the fascinating things about the coverage is the kinds of discussions the various pundits were having. It's not so much the speculation about how big the Tory majority would be (although all appeared to have agreed quite early that a Tory win was a foregone conclusion), it was the issues that concerned them: what would Mrs Thatcher do?

Peregrine Worsthorne appears to be the only one (along, perhaps, with the Canadian bloke - Bob MacKenzie(?) - on the swingometer) who broadly knew that Mrs T was going to take-on the unions - would have to - before, as he put it, 'liberalising' the economy and rolling back the state with 'anti-socialist' measures. It's certainly the kind of talk which riled the big wigs of the 'trade union movement' who suddenly realised they were in a fight to the death.

The power of the unions was certainly the preoccupation of ordinary voters of the day, which they (rightly) viewed was responsible for crippling Britain. It is also the case that the whole world had experienced some years of economic difficulty during the mid-70s, though of the developed world only Britain had carried-on regardless and failed to reform the state and industry. We had missed the boat and other countries as a consequence, in particular France and Germany, had by 1979 left us far behind. The result was that Mrs Thatcher had to play a radical game of 'catchup' but she was not helped by a Tory Party that, in 1979, still contained a large number of 'wets' (Heath-type post-war consensus, left wing Tories, I guess). In other words, she led a party that was split. But not split enough not to want to win and then stay in power.

So while there might be a great many differences between then and now, there are surely a great many parallels, too. Union power might not be expressed in quite the same way these days - blackmailing a sitting government and the entire country with politically-motivated mass strike action, for instance - but it is certainly there. Arguably, after twelve long years of Labour [mis]rule, with several superunions having emerged, in terms of political influence the unions have never had it so good. And through the direct access to the party leadership they enjoy (viz Charlie Wheelan and Unite), the same roadblocks to reform have been put in place, especially and crucially of the ever-expanding state sector. The industries might have changed but quite simply, thanks to the silent revolution that is creeping union power aided and abetted by a parliamentary Labour party with no inclination - moral or political - to halt it, we are back to square one. In terms of how utterly moribund Britain has subsequently become, it is 1979 all over again.

This new unholy consensus desperately needs to be broken and the stakes have never been higher. In this regard, the re-run of the '79 election once again is invaluable. The great battle lines had already been drawn and the frames of reference created. This was, essentially, a fight for the control of the future of the country. I'd say we're facing a similar sort of fight again today, but with one or two key differences. The battle lines have been badly blurred by the banking crisis (which, no one should need reminding - but will, constantly - was caused by a [Brown's] failure of regulation and, in the UK, their exerting appalling pressure on the government - as they knew they could because as long as they supported 'new' Labour, they could, more or less, do exactly as they pleased so long as they kept buying off Brown with a cut of the booty. This kind of stitch-up is not some 'failure of capitalism' as the rabid Left would love us to believe, it was a failure of government, and a Labour government to boot). Now those lines need to be carefully redrawn.

We do face having to make the same kinds of decisions as the electorate of 1979. And my impression from speaking with a variety of friends and colleagues, of a variety of political persuasions, is that people are ready to face up to those choices once again. Either we carry on with this inexorable slide back into state socialism, with all the attendant frailties, contradictions, injustices, checks on liberty, handcuffing of aspiration, denial of choice, nannying, cronyism, devastating debt levels, inevitable currency crises, confiscatory tax regimes, interminable propaganda, union extremism - and all the other defining mediocrities of the 70s.

Or we bite the bullet now, have a few bad years of so-called 'austerity' (though it will hardly be that!), balance the books, kickstart private enterprise with a favourable tax regime in order to encourage the wealth creators, roll back the state, genuinely reform the NHS, education and welfare (ie: don't continue to prop-up creaking, failing systems with endlessly increasing levels of spending) and then, finally, in about a decade, enjoy genuine prosperity (ie: not the New Labour chimeric kind built on debt).

To me, those are the battle lines clearly defined. The left will hate it all: it's what they do. Why will they hate the terminology, though? Because it's the terminology of 1979 - it's Mrs Thatcher's terminology. And they know they lost that argument then - rightly and badly. They know they must lose it again, if the argument is properly made by Cameron and co. If the argument is made, and given the now-transparently vicious nature of this government, you can guarantee it will be the most bitter fight on record.