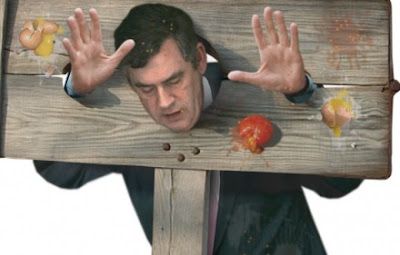 Lefty Independent journo, Steve Richards appears to have had enough of Labour leader (and usurping PM) G. Brown. While everyone else is going after arch trougher and pisspoor speaker, Mick "I wannit all" Martin, Richards has his crosshairs fixed firmly on the thick head that co-ordinates the clunking fist. Writing in low-circulation leftish rag, The New Statesman yesterday, he said:

The Prime Minister is exhausted, abused and hapless. Labour MPs have one final opportunity to remove him this summer, or accept the consequences...

Some ministers watched Brown’s inept response to Joanna Lumley and the Gurkhas with particular alarm. As one said to me: “Gordon did everything the wrong way around. He failed to deal with the crisis in advance of the Commons vote. He lost the vote. Only then, when everything was too late, did he hold a meeting with Joanna Lumley. Why didn’t he meet her at the beginning of the sequence rather than at the end? It is a case study in how not to handle an issue.”

Brown's equally flat-footed handling of the expenses scandals, which have hammered Labour's already precarious standings in the polls, and his palpable inability to gauge the public mood or modify the tone of his hate attacks on the Tories, has led to deep disquiet in the ranks of a parliamentary Labour party now utterly demoralised by the prospect of imminent unemployment and the loss of the attendant perks. Ousting him before a general election which now could (and should) happen any time is now a priority. The calculation is that if he remains, inevitable defeat will become total wipeout.

Now he has lost the media and it is difficult to see how he can change the narrative, not least when morale is so low, both his own and the government’s. One minister tells me, not surprisingly, that the mood among ministers is joyless. No one, he suggests, feels part of a team.

If Brown were to go, the problems associated specifically with him – Damian McBride, elements of economic policymaking, his personi­fication of a tired, long-serving gov­ernment – would go, too...

says Richards. While this is probably true, it seems the electorate might have simply moved on from Labour completely, whoever is in charge, and mentally prepared themselves for a Cameron government. The latter has, after all, been fairly light on his feet about the expenses debacle - though how he expects publishing expenses on the Conservative website will limit the constitutional damage that's been done to parliament by these revelations remains to be seen.

One thing is certain, though, regardless of the threat of a 'fresh face' to the Tory resurgence, Brown must go - not merely for the sake of a Labour party wishing to remain a political force, but for the sake of a country in deperate need of decontaminated or, perhaps, uncontaminated leadership for however short a time. But the equation - or gamble - is much simpler for the average Labour MP currently defending a marginal seat (ie: any majority below 10,000 these days):

If the wretched sequence that began with the McBride emails continues into the summer, I would not altogether rule out a change. After all, what would you do, if there were one more throw of the dice that might just save your seat?

True enough, but all you gather from this, ultimately, is that Brown's dithering disease has spread to the left commentariat. They or the cabinet will not convene the firing squad, let alone pull the triggers, even when the final appeal has been refused and Brown is bang to rights as the traitor he is - to Labour and to Britain. Cameron, head of a bunch of criminal piggies though he might well be, is now in charge of the agenda. He should exercise this power and force an election after June 4th - thus bringing to an end the dark chapter in British history which has been Gordon Brown's stolen premiership.
Posted by Jon Lishman at 5/15/2009 08:33:00 pm