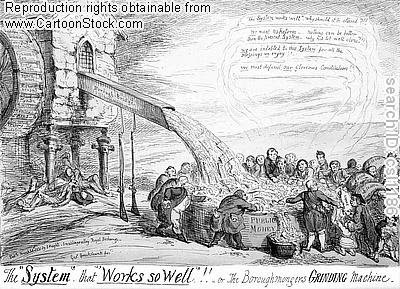 One of the ideas being mooted by the troughers at the top, desperate to save their own hides by deflecting culpability away from themselves and onto 'the system', will have the unfortunate effect of undermining the principles of parliamentary democracy by implicitly disenfranchising vast swathes of the electorate.

An MP, when elected to parliament, represents the constituency and, by implication, everybody in it whether they voted for that MP or not. But if the party to which the MP belongs is somehow empowered (for example, through some sort of 'oversight committee' of the constituency party being set-up) to dismiss the MP for whatever reason, then the electorate in that constituency are no longer represented. The person they thought was their representative in parliament has become no more than a party delegate. This also implies disenfranchisement for those who do not belong to the party. The gravity of this cannot be stressed heavily enough. There is such a thing as totalitarian democracy (one vote for only one party). Quite possibly we would have invented a multi-party version of it! In fact, a similar system was set-up in France after its revolution. It was also, in its way, a form of democracy and it utterly failed.

It's fair to say that we have been brought to this by the operation of the party system within parliament, where MPs are treated by the central party machine not as, primarily, constituency representatives, but as delegates, just like with the style of 'democracy' you would find in a trade union. It has never been worse than under this government, where representative, parliamentary democracy has been systematically undermined by what Hailsham called 'elective dictatorship'. Of course there must be some form of party unity - even some enforcement of that unity - in order to provide strong leadership and stable government.

But who's really in charge of Parliament has been forgotten. The country and Parliament need reminding: through the representatives we elect to speak for us there, we are in charge. In order to protect this crucial principle from governments seeking to rule by decree, I think it's obvious it must now be enshrined in some form of written constitution. But most of the current incumbents in the House of Commons (and the House of Lords), tainted as they are by the rotten stench of mass-sleaze, cannot be trusted either to draft or to implement this new constitution. That is why there must first be an immediate General Election. As only Cameron and Clegg argue, it is the beginning of the process of reform and not a 'cause of chaos' as our implausibly appalling Prime Minister so desperately wishes to have us believe.

A written constitution is not reform, it is affirmation and in any case I believe that "reform" for its own sake is not, technically, what is required. What's required is reassertion of the principle of the independence of MPs within parliament; the recognition in a single document that MPs are elected representatives of their constituency, not the voting fodder of The Party. (A completely new set of MPs would be major step forward to this). What is required is, almost literally, renaissance where the meaning of 'sovereignty' for Britons is clearly defined once and for all.

There are some democratic reforms that can occur during this renaissance, of course. E-democracy, for instance - a form of direct democracy - would be preferable to fudging representative democracy still further and ending-up with the worst of all possible worlds for 'we, the people': even less representation through botched and insincere (fake) reform. E-democracy is also preferable to the current, corrupt arrangements at local level in its own right.

Politicians in their attitude to constitutional reform - or, at least, this crop of particularly awful politicians - are similar to the police force in their attitude to the law: they both crave more and more powers in order to make their lives less and less difficult - and ours impossible. Both are anathema to liberal democracy. Besides, as the great S.E. Finer would remind us were he still alive:

'Politicians are not as clever or as charismatic as you or me,' pause, 'particularly me.'

Of this they should be constantly reminded, especially when they say they want to tinker with a system they themselves have abused. Be suspicious - totally.

Anyway, the upshot of all this is that at least one idea - now being seriously considered by all three parties - that constituency party committees can somehow 'call back' and 'dismiss' MPs is an affront to our democratic rights as well as being constitutionally unsound. It is a poor fudge dreamt-up by stupid and desperate careerists as a distraction for an angry electorate. It must be resisted at all costs. What we need right now is a new Parliament followed by no less than a British renaissance, not more dithering and drifting followed by disingenuous and extremely harmful, destructive 'reform'.
Posted by Jon Lishman at 5/31/2009 08:05:00 pm