The Twilight Zone: Heffer vs Piggy Simon Heffer, the Telegraph's pompous voice of the old right and scourge of all things Cameron, all things Left, has now threatened to stand against grandee Tory piggy and front runner for the Speaker's vacant seat, Sir Alan Haselhurst, if the latter fails to pay back £12,ooo-worth of gardening expenses.

This new twist might not have been quite what Dave Cameron had in mind when he threw open the Tory PP candidates list to all-comers: "The Heif" has about as much time for Call-Me-Dave as a cow has for roast beef.

“If he does not, between now and the opening of nominations for the general election, admit error, apologise, pay back the £12,000 and promise to behave, I shall stand against him as an independent. If Sir Alan thinks I am joking, I warn him I am not. I have backers and volunteers. I say this more in anger than in sorrow: we are all angry. Doesn’t he get it?”

Haselhurst might not 'get it' but you can bet your most violet wisteria that Cameron does. That money will be paid back instantly - with interest - or Haselhurst will be out before you can say 'large, female cow'.

But this is weird sort of old Tory, country gent, farmyard politics that doesn't really compute for most folk, including me. We're into real Twilight Zone stuff now and as more Z-list celebs and self-important numbskulls put their names forward as independent, 'anti-sleaze' candidates ala total windbad, Martin Bell in 1997 things can only get worse. Esther Rantzen? Robert Harris? David Van Day? David Van Day FFS!! 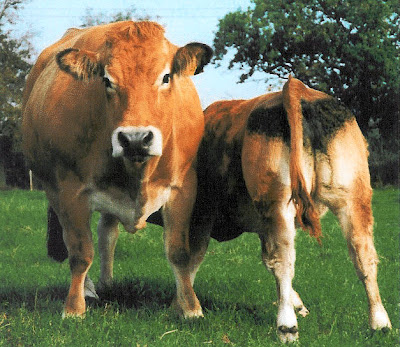 I guess he's standing on the 70s Shitpop Revival ticket. You know, "A Vote For Van Day Is A Vote For Dollar!".

Simon Heffer Heifer pictured in 2005 interviewing Ann Widdecombe in the grounds of his country estate
Posted by Jon Lishman at 5/26/2009 09:18:00 pm