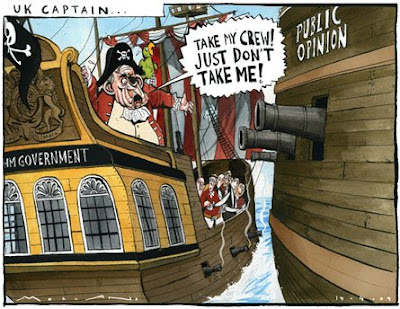 The Speccy says that reshuffle fever (swine flu?) is about to grip Downing St., and could prove to be a massive headache for Brown as the economy shows further signs of serious weakness and the expenses scandal threatens to engulf the entire cabinet.

Several cabinet ministers were already in the doghouse for various sins ranging from general incompetence to disloyalty - and back to general incompetence again - even before the various house-flipping profit gouging and dodgy expense troughing revealed the true extent of their basic dishonesty. No one is safe - but ditherer Brown might well be further befuddled by the threat from potential kamikazee attacks from any one of the freshly disgruntled cabinet members following any demotions or sackings. Peter Hoskin quotes the Mail as saying:

"Foreign Secretary David Miliband is fighting for his job behind the scenes in the face of a campaign by Business Secretary Lord Mandelson, who has long dreamed of taking his post.An ally of Mr Miliband added: 'David doesn't want to move and he's not the only one.'A source warned that Mr Brown might find several cabinet ministers prepared to wreck his reshuffle rather than accept a demotion or sideways move."

But these aren't the only potentially government-terminating banana skins for Brown. Hoskin again:

...then there's the Hazel Blears situation. If he ditches her, as he's expected to, then folk will just ask - rightly or wrongly - why ministers such as Alistair Darling, James Purnell and Geoff Hoon haven't got the boot too. But if Brown hangs onto the Salford chipmunk, then he risks looking weak - both in terms of his authority within the Labour party, and in his response to the expenses scandal. Again, another example of the lose-lose politics that our Prime Minister's mired in at the moment.

Just so. But it's also the country that's the loser. Exactly how long Brown thinks he can go on with these 'last man standing' tactics - which is rapidly where he is heading - remains to be seen. What seems certain is that doubts about his leadership, firmly in the Labour Party's collective mind even before the expenses debacle emerged, are about to surface with a vengeance. All it will take is for one of his over-promoted but hyper-ambitious pisspoor cabinet lackeys, heading for the richly deserved chop, to decide they're not going quietly for the whole, crumbling, increasingly unstable edifice that is Brown's premiership finally to come crashing down around his ears. 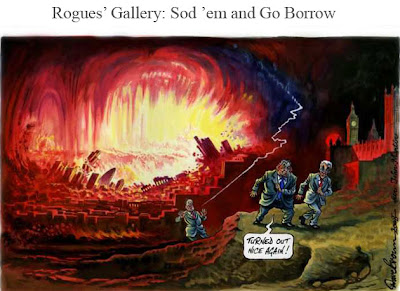 What he cannot see - and the reason why he is in the mother of all pickles - is that there's really only one gambling addict who absolutely desperately does need to be dealt out of the game: James
Gordon "he's run out of out money" Brown.

He's in this situation because he's not a leader, he's a liability. Maybe someone in the tainted Labour inner circle will finally have the courage to come out and say it. There'll certainly be candidates a-plenty after Brown has finished fiddling with his Hoons.