The Rage Of The Parliament Picts 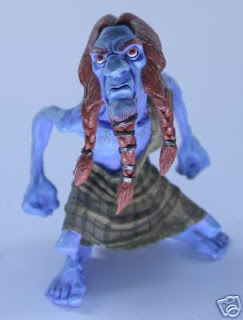 It's a question that has finally been answered conclusively; all the rumours, confirmed: the Speaker is as crazy and as Daft McBrown, our current "ard rí ".

We learn from today's Sunday Times that Gorbals Mick has blocked reform to the parliamentary expenses system at every turn, has lied about his involvement in the Damian Green scandal, and has flown into fits of rage whenever challenged about reform to the expenses system and whenever the question of his own troughing's been mentioned.

It's really worth quoting the Times' revelations about these outbreaks of Pict petulance:

THE expenses scandal is poised to claim its biggest victim as Michael Martin, the Commons Speaker held responsible for blocking reform, suffers a volley of damaging allegations this weekend...
In an interview with The Sunday Times, [John] Stonborough [Mick Martin's former media man] claimed that the Speaker had vetoed radical reform of the expenses system in a series of meetings...

He said the Speaker took control of the rules on expenses and allegedly personally edited the key 2004 edition of the Green Book on parliamentary allowances...The rules approved then are at the heart of the current scandal.

(So this is Labour's trough-system. Surprise surprise.)

2. Lies About the Green Affair:

Martin is facing questions after three senior law enforcement officials appeared to challenge his account of the botched police inquiry into Damian Green, the Tory MP...
After Scotland Yard detectives arrested Green and raided the MP’s Commons office last November, Martin told MPs he had not been informed in advance that the police had failed to get a search warrant. In a statement he appeared to blame his subordinate Jill Pay, the serjeant at arms, for not telling him the full facts. Speaking to The Sunday Times on condition that they were not identified, the three officials said they believed Martin had been told that the police did not have a warrant.

So Martin knew all along about the lack of a warrant. He lied to the House!

For the first time one of his former aides has broken ranks to speak out about his “reign of terror” that allegedly prevented officials from defusing the expenses crisis...in a series of meetings [Martin] exploded with rage when challenged about his own second home allowance claims. In 2003, [for instance], Martin lost his temper at the suggestion that his decision to claim a second home allowance on his house in Glasgow while living in a grace and favour home in Westminster did not “look good”. “He reacted extremely violently,” said Stonborough, who added that Commons officials were too scared to question his decisions.

So now we begin to see the real picture of life behind the scenes in parliament during the Labour years - and boy, it's an ugly one! A cabal of powerful left-wing Scottish political thugs infiltrated every aspect of parliamentary life - every high office, every department, every watchdog and every committee - and then proceeded to create a system of expenses that they could all milk until the cash cow was udderly dry. With a deep sense of their own, elitist entitlement, unheard of since the days of the court of le Roi Soleil, they fought tooth and nail throughout to preserve the status quo they had created whereby they could syphon off money from the public reservoir into their own burgeoning bank accounts every day of every week in a wide variety of imaginative ways.

(One might even be tempted to speculate that McBroon encouraged the housing bubble to inflate beyond all control - and all sanity - in order to allow his clan's profiteering to carry on and on, regardless of the desperate catastrophe for the UK economy caused by the inevitable, titanic bust. An "I'm all right, Jock," attitude, then, so to speak.)

Clearly the chief gangster, of course, is not Gorbals, vile though he indubitably is. Oh no. It's most certainly Gordon the Broon. Thankfully, the head of the clan is about to receive a right royal flea in his shell-like from Her Maj. Wonder if he'll explode in a fit of spiteful Scots rage in that meeting, too. What price to be a fly on that wall (so long as you're not squashed by a flying Nokia)!

And just for good measure, here's how another of the Stoneage Pict ruling tribe reacted upon hearing that his kith was about to be sent packing:

Lord Foulkes, the Labour peer, said Martin had “no intention of bowing to pressure this side of the next election”.

“It seems that some MPs are looking for a scapegoat in the Speaker and, mistakenly, think his departure would take the pressure off them,” he said. “It is not going to happen."