Eye Of The Storm 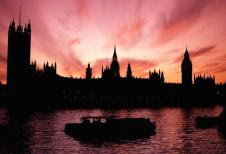 Peace broke out on last night's Newsnight as the historic events of the day were digested, according to left wing cuckoo in the nest of the Spectator, Martin Bright. Not so sure myself. It was certainly chummy, calm and the discussion about possible directions of parliamentary reform was fairly substantive, especially from Douglas Carswell. But it was not a fair reflection of the febrile mood either in a vegitative parliament on life support or in a country crying out for it to be put out of its misery.

If there is a period of calm over the next few days - or hours - it will be a phony calm, caused by the shock of the new reality facing MPs, and particularly government MPs and ministers. It's clear now that Gordon Brown's disingenuous and sometimes wildly contradictory remarks in his car crash of a press conference yesterday have stunning implications for members of his own front bench, as well as for Labour backbenchers.

As usual he is playing a desperate catchup game. David Cameron has already dealt with these issues - and with the main offenders - up to the point where common sense dictates he can do no more without moving on to the next, essential stage in the reform process: an immediate general election, where all his MPs can and must face their accusers constituents personally and with their careers on the line. He knows this. He knows it's in touch with popular opinion and he also knows that it's right. So he's calling for it, and those calls will simply get louder and louder as government ministers fall one by one under Brown's putative promised purge and as his administration grows ever more enfeebled.

But if the purge fails to materialise; if Brown backs down on the pledge of a genuine clean-up of his own party by keeping-on tainted ministers and hiding behind the 'within the rules' mantra, he will end-up in an even worse position by looking like a ditherer: he will be totally compromised and condemned as a coward. He is boxed in and, as a consequence, is politically paralysed, whereas Cameron's instincts have never seemed keener and his party, I would hazard, has never been more energised in spite of its travails (viz: Carswell's performance).

So the equation has now resolved itself into a simple inequality: the one thing Brown dare not do is call the one thing that has always terrified him the most, a snap general election. But the only thing that an angry electorate will settle for is a general election on their terms, not his. This is an impasse: Brown will fight tooth and nail to avoid it, while Cameron's - indeed the country's - demands for it will grow stronger and stronger daily. The beautiful tempest sliding across the skies above Westminster fleetingly sits directly over Big Ben's clock tower: the eye of the storm is parked above Parliament.

As the eye passes, the second phase of the storm will be far more violent than the first. While it rages and their liability leader becomes even more indecisive and irrational deep within his Number 10 cave, at some stage it will finally dawn on the Labour party, as their polling plumbs record depths, that the only thing that can tame it is the general election, with or without Gordon Brown.

The next month is crunch time for Labour - and quite possibly the Prime Minister's last in office. It might, therefore, be worth their reminding Brown of his Shakespeare before it's too late: