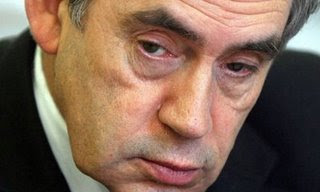 Brown: What Do I Say Now, Dave?
Sky News tells us that Gordo has now said he is "appalled and angered by this week's revelations" about MPs' expenses and apologised on behalf of all parties! Bullshit.

How the hell does Brown think it makes him look when he insincerely claims to be 'appalled' by the fraudulent behaviour of his naff MPs, and then 'apologises' for everyone, regardless of whether or not this falls within his purview (it doesn't)?

You can say what you like about him following Cameron like some sort of dumb animal, bereft of individual moral thought, bovinely waiting to be led by the nose; that his delayed, faux outrage which smacks of cynical calculation casts an even worse light on his party and his premiership; that his pathetic attempt to deflect criticism by exceeding his authority (does he understand he can't do this?) in apologising on behalf of parliamentary parties of which he is not a member and which he does not lead.

You can say all that and a hell of a lot more besides and you know what, you'd be dead right on all counts.

Me, I think it just makes him look a total and utter fool - and a dishonest one at that.