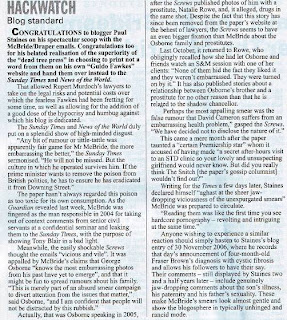 After a heavy day of largely unproductive library toil, yours truly decided to unwind with a Tesco cheese sandwich and a cup of tea. Choice of reading material was a tricky one but eventually nostalgia beat common sense and I opted for my one-time favourite, Private Eye. My mistake.

Don't get me wrong, 80% of this satirical dinosaur remains quite entertaining and occasionally even germane. But the other 20% (that which is written, I suspect, by royal scrote Ian Hislop) is just abject, vain hackery. But stumbling across yet another reminder of why I gave up taking this once noble organ, I nearly choked on my pickle. So I dawdled rushed home, unpacked my scanner, spent half an hour working out how to plug it in, scanned the story (12 times), cropped it, fiddled with it and finally uploaded it so I could share it with you, my phantom readers (click on piccy).

Hislop, for it is almost certainly he, has surpassed even his own legendary standards of smug journalistic conservatism. Masquerading for years as a renegade moral crusader with a nose for the big scoop, my view is that his cover has finally been well and truly blown. Read it and you will see that all he has managed to do in his inadequate counterpoint attack on Guido is ably advertise his manifest ignorance of all things 'new tech' and display what can only be described as a level of old world, MSM snobbery that makes Michael White look like Iain Dale.

Don't get me wrong, I am no lickspittle creepy sycophant with my tongue up Staines' fundament: I hadn't even heard of him until a few months ago. But credit where credit is due. The substantive point about 'smeargate' is not, awful though it was, the content of the hatemail. It's the fact that Guido broke the mould - obliterated it, in fact - the results of which we are still witnessing today as our pisspoor government finally collapses. He shat on the twin pillars of media capture in this country from a great height at the same time: this government's spin machine and print journalism, the former feeding the latter with much-needed copy in exchange for an easy ride. Private Eye has gradually evolved into a slightly eccentric extension of that cartel. And all it can do is have a feeble dig at 'the blogosphere' (Hislop's real target):

These [comments beneath a 2006 story on Fawke's site I can't find] make McBride's smears look almost gentle and show the blogosphere in typically unhinged and rancid mode.

Yes, yes Ian. I'll get your blanket for you dear. I give Private Eye 12 months. Sell-by dates and all that.

Its oft-mimicked modes of reporting, however - none of which were invented by eternally snide cub scout Hislop - will last forever.
Posted by Jon Lishman at 5/01/2009 04:54:00 pm