The outbreak of apologies today, with the auld fraud himself choosing to say sorry on behalf of all MPs for their evil ways (stretching his authority well beyond its limits in the process), has overwhelmed yours truly with the barefaced cynicism that underpins it.

Add to that the spectacle of moronic-rather-than-impartial Speaker of the House of Commons, old school Scotch lefty Mick Martin, dressing down one of the few decent MPs left in this parliament, Kat Hoey, and the picture is now nearly complete: none of these people deserves to be in the job any more. This is Martin, just after he sarcastically slapped Hoey down:

Is it the case that an employee of this House should be able to hand over any private data to any organisation of his or her choosing? The allegation - and I say they are allegations - is that that information was handed over to a third party to find the highest bidder for private information

MPs: None of you is safe any more. Not one. You better believe it.

==update==
Spectator Live is saying that the campaign to oust Mick Martin is gathering pace. But as the Speccy says, there is a complex motive behind this burgeoning campaign. The author's observations are worth noting here:

This may look like a Tory initiative, but disgust at what’s been going on is spread across all parties. I also think it's significant that the 2005 intake are taking the lead here: the world has changed, Westminster hasn't, and this is clearer to some MPs than others. I draw a division across all parties: good (who are disgusted) the bad (who know it's bad, but don't want to rock the boat) and the ugl 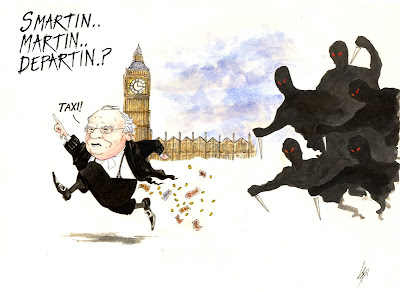 y (Margaret Moran and Derek Conway). It's time we heard more from the good.

I think that's what's impressive about his 'good, bad, ugly' scenario: it crosses party boundaries which would suggest that it is sincere and unsanctioned (by party leaderships). Despite this, however, I also think it will cause the government infinitely more damage than the Tory Party. Which is why the Tory leadership will not dream of intervening, while Brown will predictably call in the heavies (you know, the 'we break thumbs' brigade) to stomp on it. Only what they do not understand is that this time they'll be stomping on an anti-tank mine. Let's hope they don't find out. BOOM! Bust.
Posted by Jon Lishman at 5/11/2009 08:13:00 pm