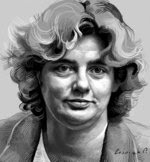 The Sleazygraph is saying that androgynous mother of three and former Minister of something or other, religious nut Ruth Kelly claimed thousands of pounds for flood damage to a house that was insured.

It's unclear from the report whether she claimed on the insurance policy as well - which would be fraud and would merit prosecution. However, what is clear as that she abused the allowances system in order to at least avoid claiming on the policy thus avoiding bumped-up premiums.

Meanwhile, another Tory has bitten the dust for fiddling around with his pond and claiming it back. Bizarre indeed. Yet another, a whip no less, will probably be defenestrated tomorrow for managing to forget which of his houses had a mortgage outstanding on it - then claiming for the wrong one. Stupid boy.

It should be noted that it seems only Tories resign or are fired at the moment. No cabinet minister has gone, but with Jacquie Smith and Hazel Chipmunk both in the firing line for profiting from home-flipping it's becoming abundantly clear that Brown cannot hide forever, try though he will.

Sir Peter Viggers claimed for a £1,645 floating “duck island” in the garden pond at his Hampshire home. In a statement, the Conservative Party said: “Sir Peter Viggers has confirmed that he will retire as MP for Gosport at the next election. He will do so at the direct request of David Cameron”

Natascha Engel, a back-bench Labour MP, claimed thousands of pounds for furniture, champagne flutes and other household items, including a £2,000 sofa. She disclosed her own claims after deciding that some constituents would find them unacceptable and has organised a series of meetings for her constituents to judge whether she should stand down.