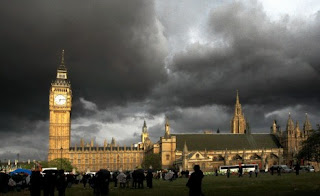 Today is the day when parliament fights back. The beauty within the scandalous, dirty, pathetic behaviour of our self-styled ruling classes is the glorious institution that, by chance, they inhabit but which, thanks to the rage of the people they represent, might just about be ready to reassert its authority - so that the hard road to enlightened reform finally, possibly can be taken.

The beauty is in the principle of the institution and in the civilised, lenient retribution its shabby abusers can almost certainly expect. The beauty, therefore, that can be found within this stinking scandal is in the highly moral, utterly informed reaction of the people - of us - which should leave even the most cynical British political refugee with a sense of new hope: free people are honest.

It should put the fear of God up the pocket-lining, hypocritical socialists. Free people - all people - don't have to put up with this kind of paternalist shit. Parliament belongs to us - and that better be bloody well recognised tomorrow. Especially by the Scots socialists.

I won't settle for anything else.

So. What must happen should be this: The Speaker will deliver his whining, baleful appeal, begging for understanding about why he simply had to conspire with certain (Labour) MPs to defraud the taxpayer. He'll slink and slide and blame and bluster, aware all the while that in the eyes of the British public, the people who can destroy MPs' careers in a heartbeat, he is the epicentre of the corruption that has brought the institution he swore to protect so desperately low, and brought our country into shameful, painful, international disrepute.

If he fails to utter the words 'I resign' in his speech, the storm that will break, and his subsequent, forced ousting, will signal the moment when the people of Britain begin to regain control of their own destiny. It will be remembered as the moment when politicians realised that their reliance on the good will of their constituents took absolute precedence over all other considerations, machinations, vanities and distractions. It'll be remembered as the beautiful storm that broke over the British parliament, consumed in its path a fair portion of the lawmakers and cleansed the rotten pestilence that is political careerism and abuse of office from its precincts. Preferably forever.

However, if that does not happen; if, tomorrow, we don't see a Speaker fall and a parliament contrite; if we merely see more backsliding and buckpassing, mendacity and sophism - more of the same - then the people in that House better be prepared for a very different kind of storm: the bubbling, brewing, angry, ugly storm of (I hope bloodless) revolution.

We've had enough, damn you.

So be bloody well warned, "honourable" members. We're ready to see action. You have one last chance to choose what kind of action it has to be. You fail, we move.