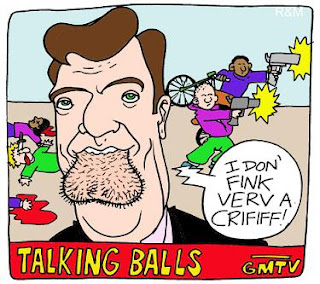 I know it's been up for a while, but it's so fantastically naff that I had to do something on it. The Sunday Times says Gordon Brown wants Ed Balls to replace Alistair Darling. In a scoop sourced to a "top-level leak from Downing Street" [update: Guido thinks it's Mandelson. The farce is complete!] it's revealed that this is some sort of desperate strategy by Brown to reinvigorate his dead government.

...the prime minister wants to make the appointment the centrepiece of a sweeping reshuffle on Friday, after the local and European polls.

With Balls, the schools secretary, one of the most divisive figures in government, the move would be a huge risk, which could trigger a ferocious backlash within the Labour party that could spiral into a leadership challenge.

The Sunday Times understands that Lord Mandelson, the business secretary, has warned Brown of the potential dangers, but is ready to support the move as part of a final attempt to revive the government’s fortunes.

It's difficult to know which part of this to laugh at first: one of the "most divisive figures in government" ousting a man who could well turn into Brown's Geoffrey Howe; Lord Mandelson giving his qualified blessing while warning of the "potential dangers" - something he knows all about; the "dangerous backlash" from supine Labour backbenchers frightened by the prospect of imminent unemployment and losing all those delicious perks. Whichever bit of this hairbrained (and now leaked) scheme unravels first, what's certain is that this is going to be a real blockbuster summer of political bloodshed.

But it gets worse (better, I mean):

Brown’s authority has become so weakened that some ministers are openly defying Downing Street. Insiders claim the most audacious are dodging his calls – deliberately “going to ground” when he tries to phone them.

It's amateur night at Whitehall, folks. Low farce in a paralysed regime. This is your 'government' remember. And people still wonder why we so desperately need a General Election. Well, maybe this part will finally convince them:

According to the well-placed insider, Brown has been working on the scheme to make Balls chancellor since the expenses debacle engulfed Westminster, taking a handful of his closest aides into his confidence.

Brown knows the appointment would be highly controversial and is ruminating over the possible consequences.

"Munch, munch...er...munch." The consequences will be the political equivalent of multi-megaton nuclear devastation for you, Gord - happily.

Yesterday one senior Blairite figure warned of devastating consequences for the prime minister if he pressed ahead. “If Gordon wants to bring the whole house of cards tumbling down, this is the way to do it. The reaction will be apoplectic,” he said.

A Downing Street spokesman said: “We do not comment on reshuffles.”

That's OK, spokesman geezer, you don't have to. We've got everything we need.

As the Brown slowmotion trainwreck enters its final phase (taking out the station and exploding in flames), one can't help but be curious about how poor old Darling, Brown's loyal retainer for so many years, feels about all this. Howe will he react, I wonder ;) 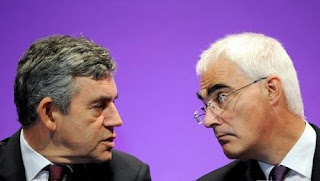 stroy it for generations as a serious political force over the next few months will be absolutely captivating. If it's allowed to happen, that is.

[Insert Your Caption in the Comments Below]
Sadly, even Labour knows now that Darling or Balls, Harmon or Smith, Blears or any other of their incompetent, sleazy ministers you care to pick are not really the main problem (serious problems though they all are): it's Brown. And they're going to get rid of him - within weeks.