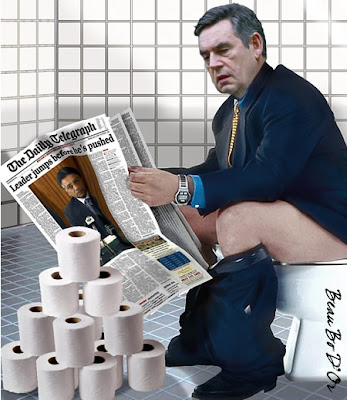 Brown: Shitting Bricks
Fraser Nelson reports that the latest polls show Labour's support has collapsed even further. This is what he says:

The bottom has again dropped out of the Labour party. A BPix/Mail on Sunday poll shows its popularity has slumped to its lowest level since polling began in 1943. Its 23 percent, just below the 23.5 percent it polled at Michael Foot's nadir. Meanwhile a YouGov/Sunday Times poll puts Labour down 7 to 27, yielding a 16 point lead to the Tories who are on 43 percent. My personal favourite: a healthy majority, 61 percent, say Brown has “completely lost authority”. And yes we have twelve fun-filled months of this pantomime to go.

It's worth noting, though, that, as Mike Smithson at politicalbetting.com says:

It is highly likely that the bulk of the fieldwork for both surveys took place BEFORE the expenses revelations.

There is a snap poll in the News of the Screws about expenses which shows that 68% of those polled say they think less of Brown because of his and his party's behaviour. It's the first indication that a Labour government already in steep decline has been badly damaged by the scandal.

I'm not convinced that they should be hoping to recover some of that ground after revelations about Tory sleaze. If, as I expect both Cameron and Clegg will do, the Tories and the Lib Dems co-ordinate their attack to steal the march on Labour, I really do think Brown could be ousted - and very soon.