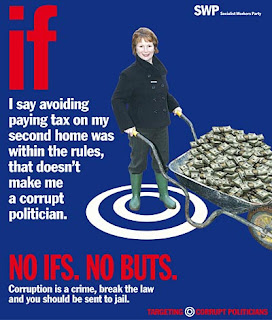 Curious thing. I dislike extremists intensely but very occasionally, and like an awful lot of other ordinary people no doubt, I'm tempted to agree with them. Only tempted, mark you. (For example, I'd prefer to see the ginger chipmunk Blears and her epic failure of a government kicked out of office through an immediate General Election rather than hounded out by the threat of arrest, pleasant though that sounds!) But if I were to contemplate voting for an extremist party and all I had to go on were their campaign posters, which would I choose I wonder?

This poster (right) from loony left rag, Socialist Worker seems to capture the underlying mood for national retribution if nothing else. Maybe that's what it's for. There is a difference, though, between the metaphorical currency of, say, a Guido Fawkes ('blood is spilt'; 'political beheadings', 'snouts in the trough' and so forth) and the call for summary imprisonment here, or the BNP invective below. While centre-right bloggers are trying to make a point with humour (and usually failing in my case), these guys actually mean it. So the resemblance the socialist worker poster bears to the BNP campaign, who have also gleefully jumped on the populist version of the anti-sleaze bandwagon, is startling - and not superficial, murderously loathe each other though they genuinely do and always have. 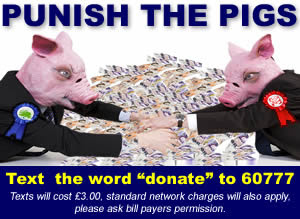 While there certainly are differences - the nationalist extremists' target appears to be the whole of mainstream politics and their main rivals, UKIP, whereas the socialist extremists, at least in their minds, are attacking Labour from the Left - there are distinct similarities,too.

Both appear to seek arbitrary punishment for those who have been found guilty in that old chestnut, the 'court of public opinion' (Harriet Harman should be ashamed of herself). Both in reality are exploiting an issue which has deeply offended the electorate to further their hazy, extremist agendas. Both seem to want to 'do away' with the 'old order' - rather than reform it - presumably in favour of some vague 'new' one, as yet undefined.

I know, I know, it's just a couple of posters, so there's not really that much that can be gleaned from them. But both are very recent and both you will see quite a lot of in the run-up to the Euro and local elections, the BNP 'piggies' one in northern Labour-held town centres and the socialist worker 'chipmunk' one outside student union build 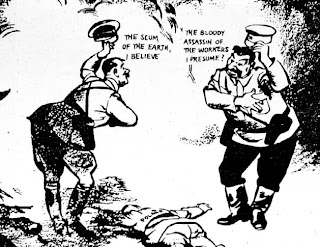 ings across the nation.

Above all, both are very similar because both 'movements', beneath all the hyperbole and the posturing, are too. That's worth bearing in mind if you're ever tempted to vote for an extremist party: you never know what it really stands for - or where you stand. Dead in the middle, usually. Like Poland.

PS: If you're interested and want to know more than you ever could reading my stuff, Donal Blaney wrote a great piece sort-of on this theme a few days ago.
Posted by Jon Lishman at 5/21/2009 11:40:00 am