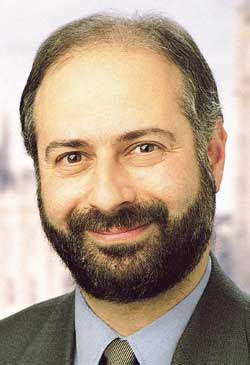 This is Fabian Hamilton, Labour MP for Leeds North East. He has overcharged his expenses on several occasions and, having been outed by the Telegraph, has now kind-of published them on his website (he's buried them in there).

The fact of the matter is, according to the report, this married man and father declared his mother's home in London as his main residence and then when she passed away flipped his 'second' (family) home from Leeds to his real second home in London - all so he could make maximum claims every year and double-up on fixtures expenses. That's all without mentioning the overcharging and many other dubious sundry claims which this man has chosen not to list on his curt, reluctant web entry. As the DT says:

However, the MP did not mention the regular claims made for decoration, repairs and furnishings at the two properties, including the purchase of two televisions, an £800 bed, new windows, wardrobes, and a DVD player.

This guy has been cheating the system, has been caught, has claimed it was, er, an 'error' (you know, like frauds do) and has the temerity to expect to keep his job.

Well, I've got news for you, Mr Hamilton. You might think you've got away with it, and if you aren't going to be investigated and prosecuted then, in a way, perhaps you have. But you haven't got away with it in the way that will matter to you most: you're gonna be unemployed very soon.

Tell you what, Fabian, old chap: why don't you shock the country, do yourself a favour and do the decent thing: resign.

PS:
Thanks to Plato for drawing my attention to this Radio 5 interview with another piggy, walking anagram, Lembit Opik. As car crashes go, this is a real humdinger. I just could not believe my dainty ears. Listen to it (if you can bear to). 39 mins on.

==Update 10.07pm==
It just gets worse and worse and worse. The Telegraph's method of dripfeeding these revelations is working very well if their intention is to crank up public (my) hostility to these morons. A former Labour minister, it now says - some ugly hoon called Elliot Morley - claimed 16 big ones for a non-existent mortgage. Breathtaking.
And fraud.
Posted by Jon Lishman at 5/13/2009 09:05:00 pm