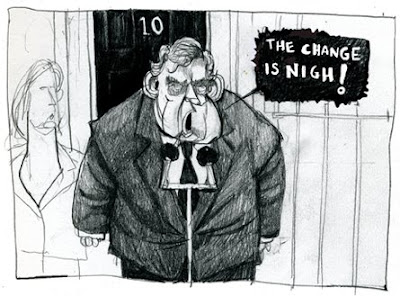 MPs are imploding like mosquitoes on a motorway today - particularly Tory ones. So for a bit of light relief, yours truly has done a bit of trawling around to find some jokes and quotes about our elected lords, ladies, masters and mistresses. Spare a thought for the poor dears, though - they're almost an endangered species now. Diddums.
A few of these are unattributed. If you know who said what when, please let me know. Ta.

"During Britain's "brain drain," not a single politician left the country."

"Crime is merely politics without the excuses."

'Politics is supposed to be the second oldest profession. I have come to realise that it bears a very close resemblance to the first.'
Ronald Reagan

'Politics is the art of looking for trouble, finding it everywhere, diagnosing it wrongly, and applying unsuitable remedies'.
Sir Earnest Benn

'You can fool all of the people all of the time if the advertising is right and the budget is big enough.'
Joseph Levine

'The House of Commons is the longest running farce in the West End.'
Cyril Smith

'The Green Belt is a Labour initiative and we intend to build on it.'
John Prescott

'Tony Banks described the English fans arrested in Marseilles as brain-dead louts - that goes for me as well.'
Harriet Harman

Gordon Brown is out jogging one morning, notices a little boy on the corner with a box. Curious he runs over to the child and says, 'What's in the box sonny?' To which the little boy says, 'Kittens, They're brand new kittens.'

Gordon Brown laughs and says, 'What kind of kittens are they? 'Socialists', the child says.

'Oh that's lovely, 'Gordon smiles and he runs off.

A couple of days later Gordon is running with his colleague Peter Mandelson and he spies the same boy with his box just ahead. Gordon says to Peter, 'Watch this.' and they both jog over to the boy with the box.

Gordon says, 'Look in the box Peter, isn't that cute? Look at those little kittens. Och aye laddie, tell my friend what kind of kittens they are.'

The boy replies, 'They're Tories.'

'What?' Gordon says, 'I jogged by here the other day and you said they were Socialists. What's changed? 'Well, 'the lad says, 'Their eyes are open now.'

The trouble with political jokes is they get elected.

A little boy goes to his dad and asks, "What is politics?"

Dad says, "Well son, let me try to explain it this way: I'm the breadwinner of the family, so let's call me capitalism. Your Mom, she's the administrator of the money, so we'll call her the Government. We're here to take care of your needs, so we'll call you the people. The nanny, we'll consider her the Working Class. And your baby brother, we'll call him the Future. Now, think about that and see if that makes sense,"

So the little boy goes off to bed thinking about what dad had said.

Later that night, he hears his baby brother crying, so he gets up to check on him. He finds that the baby has severely soiled his diaper. So the little boy goes to his parents' room and finds his mother sound asleep. Not wanting to wake her, he goes to the nanny's room. Finding the door locked, he peeks in the keyhole and sees his father in bed with the nanny. He gives up and goes back to bed. The next morning, the little boy says to his father, "Dad, I think I understand the concept of politics now."

The father says, "Good son, tell me in your own words what you think politics is all about."

The little boy replies, "Well, while Capitalism is screwing the Working Class, the Government is sound asleep, the People are being ignored and the Future is in deep poo."

The avoidance of taxes is the only intellectual pursuit that carries any reward.
John Maynard Keynes

Instead of giving a politician the keys to the city, it might be better to change the locks.
Doug Larson

The art of Government consists in taking as much money as possible from one class of person to give to the other.
Voltaire

A man was coming home from work one day along the M25. He noticed that there was a lot more traffic than normal. As he got further up the road all of the traffic had come to a standstill. He saw a policeman coming towards his car, so he asked him what was wrong.
The policeman said, "We are in a crisis situation. Gordon Brown is in the middle of the road and he's very upset. He says he doesn't have the £500 billion needed to fill his black hole, and everyone hates him. He's threatening to douse himself in petrol and set light to it."
The man asked the police officer what he was doing about it.
The copper said, "Ah, well, I'm going from car to car asking for donations."
"Oh, great. How much do you have so far?" the man asked.
The bobby replied, "Oh, well, as of right now about 200 litres - but I've only been collecting for about five minutes."